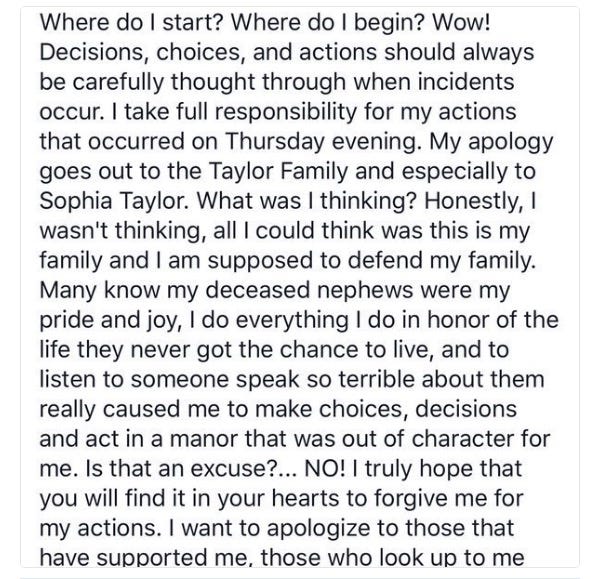 ESPN – Signee Jeffery Simmons will be allowed to enroll and play football at Mississippi State, but with conditions attached — including a one-game suspension served in the season opener — the school announced Thursday.

Simmons was arrested in March and charged with simple assault and disturbing the peace after a video that appeared to show him striking a woman several times after she fell to the ground emerged on social media. The defensive end prospect, who was ranked 84th overall in the 2016 ESPN 300 and signed with the Bulldogs in February, is awaiting legal resolution of the incident.

The university issued a statement Thursday that said Simmons “will be evaluated by the licensed professionals at the university’s Student Counseling Services and be required to complete any program prescribed by that office.”

I posted this video back in March – Five-Star recruit Jeffrey Simmons beating the absolute crap out of some woman.

He apologized and said it was all the result of some long standing dispute between the two families, like a Hatfields and McCoys type deal if you will.

I guess Mississippi State really, really liked that apology? Not only allowed to still enroll at the school while the legal situation isn’t even resolved yet…but slapped with a whopping 1 game suspension and some “counseling.”

While he will be allowed to enroll for summer classes and participate in football activities, Simmons will be suspended for the Bulldogs’ season opener against South Alabama on Sept. 3.

The university issued a statement Thursday that said Simmons “will be evaluated by the licensed professionals at the university’s Student Counseling Services and be required to complete any program prescribed by that office.”

Obviously not surprising considering, like I mentioned, he’s a 5-star recruit. He’s 6’4 275. It’s the SEC. He can help win some football games. What did you expect?

This AD is such a clown though – stop pissing on my head and telling me it’s raining my dude.

Stricklin said Simmons’ situation was “unique” in that it wasn’t “a sexual violence issue as defined by law.”

“Our sense was this was a parking lot fight that got out of control, which is why he’s not being charged with domestic violence or sexual assault,” the AD said. “That doesn’t make it OK.”

Ultimately, Stricklin said, Mississippi State decided that “five seconds of a really poor choice caught on video shouldn’t preclude a young person the opportunity to go to the university he wants to go to and compete.”

As for the one-game suspension, Stricklin said it was “highly unique” to issue discipline to an incoming student, but wanted to set an example — to Simmons and others — “that these type of actions and poor decisions are not acceptable.”

You’re not setting an example, and “five seconds of a really poor choice caught on video” is like, stealing a candy bar at CVS or something, not holding a woman down on the concrete and smashing her face in with your fists.

Here are the SparkNotes, and I’m paraphrasing – “this dude is sick at football, we need him on our defense, this thing was so long ago I honestly assumed everyone would just forget about it.”