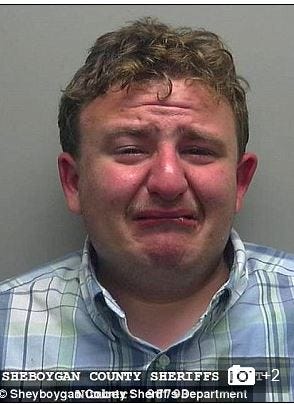 DM- A Wisconsin teenager was photographed crying in his mugshot after being busted for an alleged sexual assault at a party where he drunkenly threatened to cut a woman if she didn’t have sex with him while exposing himself. A Plymouth man called the cops accusing Anthony J. Zingale, 19, of trying to sexually assault his wife at a party they were hosting in their home. The woman told officers that she was using the restroom in her home when the teenager walked in holding a knife while exposing himself from the waist down, the Sheboygan Press reported. She said that ‘he pressed the knife to her neck and said he would cut her if she didn’t have sex with him,’ the newspaper reported. The frightened woman was able to persuade him to leave the bathroom by allegedly saying they should go to a bedroom. Once they exited the bathroom, she screamed for help and others came into the home at the party. He also said that his mother was at the house party when the alleged attack took place around 10.30pm on May 28.

That last sentence stole the show for me. The part about this dude’s mother being at the same house party where this happened. How fucking embarrassing for the mother. Like she’s off in the corner drinking her chardonnay and little boy is trying to fuck in the bathroom. So embarrassing.

PS – How stupid is this kid for thinking this lady wanted to fuck in the bedroom? It’s like the oldest trick in the book. Fake like you’re interested and then make a run for it.