Leonardo DiCaprio was a busy boy in Cannes recently – betting Tobey Maguire he could score with SIX Victoria’s Secret models a night in Cannes in a week – and he managed it!

Sex-obsessed Leo is on a girl bender as he continues to revel in the single life following his breakup last year with model Kelly Rohrbach. So, Leo decided to kick it up a notch at Cannes.

“He sleeps during the day typically and parties all night,” an insider told All the Buzz. “He figures the girls will be up for twosomes and threesomes to make his goal more practical. It is the talk of Cannes, as everyone knows what he’s up to! Like many famous men before him, Leo seems to have an addiction to more is better.”

Just when you thought maybe Leo was heading over the hill, getting a little old, taking his Oscar and focusing all his energy on global warming and carbon footprints and CO2 emissions and saving the polar bears…he comes out of NOWHERE to remind everybody who Leonardo fucking DiCaprio is. Is this an unsubstantiated rumor from some tabloid rag that has absolutely nothing to back it up? Yes. Is it 1,000% true that Leonardo DiCaprio banged 6 Victoria’s Secret models in one night at Cannes? Absolutely.

The only thing that doesn’t ring true about the story is that Tobey Maguire bet him he couldn’t. No way Tobey Macguire bets against that. Guy is Pussy Posse. He knows better. 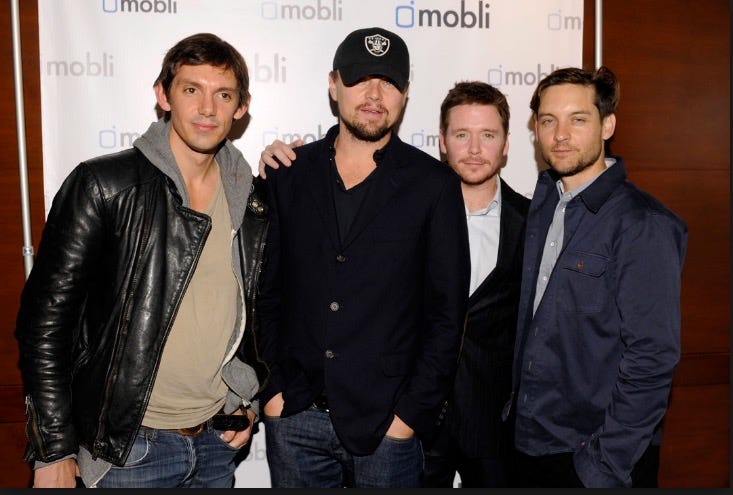 Also, how about Celebitchy talking about how gross and disrespectful Leo is? Huh? Wearing that diamond studded bra for the fashion show and sleeping with Leonardo Dicaprio, the two things every Victoria’s Secret model dreams about when they get into the industry.