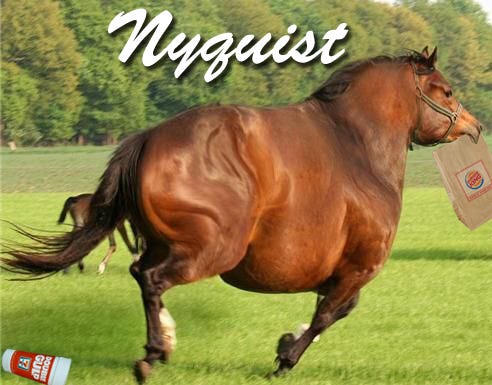 There was something supsicous from the start when Nyquist unceremoniously bowed out of the final leg of the triple crown like a coward. First he pulled the old middle-school mystery illness which “magically” cleared up as soon as he got back to California and started getting masturbated again. Then he said he was all better but still wouldn’t race in the Belmont due to the threat of injury, and took out his rage by blocking journalists on twitter. Basically Nyquists excuse-making and wimpiness had already cemented him as the horse equivilant of Jadeveon Clowney. But then more photos started to emerge of a horse that boy, sure looks a lot like Nyquist, and let me tell you, they’re not pretty.

He may come from a championship stable, but it looks like Nyquist has been hunkered down at a Golden Corral instead. Eddie Racey here has also been conspicuously absent from his media obligations, but to his credit its probably tough to address reporters when your neck deep in a trough wearing a retrofitted sleep apnea mask as a snorkel so you can eat and breathe at the same time. I hate to be cynical but disappearing from the public eye looks to be nothing more than a half-cocked attempt at making sure that the value of his sperm stays at a all-time high. Tough to command premium prices for horse semen thats the consistancy of cake batter.

If these allegations are true, there can be no debate: Nyquist let fame get to its stupid little horse brain too fast, got fat and lazy, and blew his only chance at a Triple Crown, and might- nay- will go down as the most overrated horse in the history of racing.

Seen it a thousand times from professional athletes. You have one good season, you get a little money, a little notoriety, strangers keep trying to get you to sleep with them for your seed, and next thing you know your excusing yourself from physical activity because your concerned that running a short distance under your considerable body weight could shatter your femur. Also- why don’t horses pay child support? Something to thing about.

In conclusion- Nyquist the horse is a textbook example of how not to act if you ever win the Kentucky Derby. I just hope he gets the help he needs before its too late.