WTOP - A young boy is seen hitting one of two suspects on surveillance video during an armed robbery at a GameStop in Silver Spring, Maryland. Montgomery County police say two suspects armed with handguns entered the store just before 9 p.m. Friday. One suspect ordered three customers, including the young boy, against the wall near the counter. Surveillance video released by police shows the boy running up to one of the suspects and hitting him before being grabbed by the suspect. WTOP’s television news partner NBC Washington reports the boy is 7 years old. “Well, he’s tough. He’s tough and, you know, I think instincts come out in situations like that,” the boy’s mother said. Immediately afterward, both suspects walked behind the counter and ordered two clerks to the floor while they took an undisclosed amount of cash and personal property. Police say the suspects then fled out the front door. 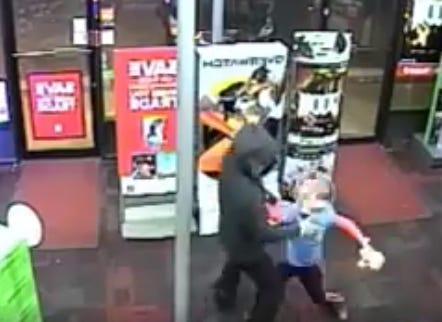 Fuck yeah little kid, fuck yeah! That was awesome. What a hero. Those guys thought they could waltz into GameStop and just rob the place, no big deal? Hold up the nerds behind the counter for the cash and book it out of there? Nope. Little did they know there was a 7 year old in there ready to fight. He just wanted to play the XBox in the store in peace, and those burglars were fucking up his plans. That 1-2 punch to the ribs was as solid of a combo you’ll ever see. They should hand over the keys to the company a la Willy Wonka to this kid. Just hand it right on over to that little Charlie GameStop. Not everyone would punch an armed robber in the guts to protect some video games. The guys behind the counter hit the deck and gave over the money, but that 7 year old was not going down without a fight.

PS: We have 4 year olds jumping into Gorilla cages and 7 year olds trying to fist fight armed robbers. Being a parent is literally impossible.