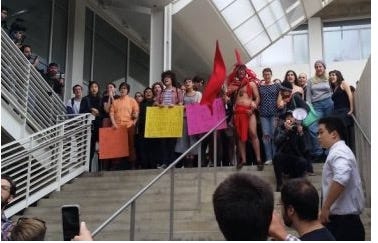 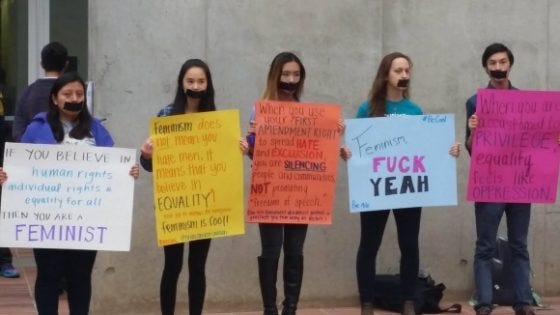 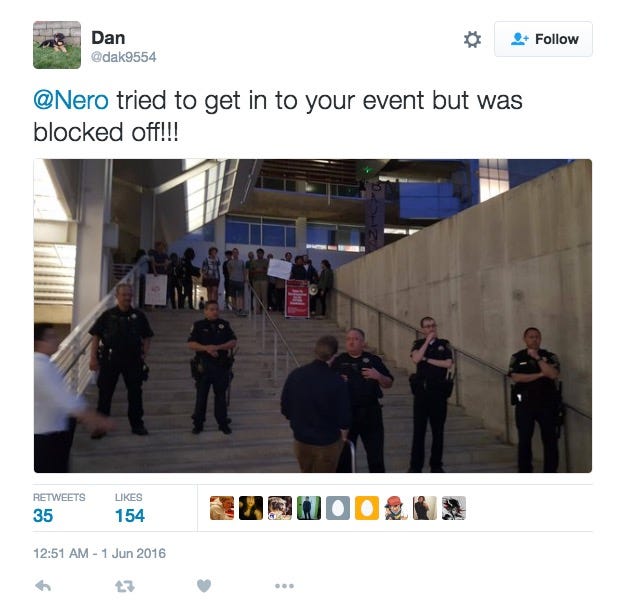 The College Fix – A horde of student protesters crowded in front of UCLA’s Broad Art Center on Tuesday to prevent hundreds of Milo Yiannopoulos fans from entering the venue and hearing the conservative-gay firebrand speak.

A female student has an emotional breakdown against pro-Yiannopoulos fans waiting in line (video below).

A female protester disrupts the event shouting “I hate you” at Yiannopoulos at the top of her lungs.

Just another day on the “Dangerous Faggot” tour.

College protester life in a nutshell right here. Seriously does anything sum it up better than 1) accusing a gay guy of spreading hate speech, 2) blocking off the entrance and not even allowing a speech to take place because it’s conservative themed, and 3) this girl?

That’s it right there.

At least security and campus police did their job.

Although many guests had lined up hours before the event’s start, police officers manning security did not appear to attempt to disperse the eclectic crowd of student protesters blockading the main entrance so guests waiting could go inside.

Meanwhile, shouting matches ensued between the hundreds waiting in line and the 75 or so protesters lining the entrance and flanking the building.

“Bruins against hate!” — aided with a megaphone — was met with “USA” or “Build that wall!” Chants and taunts passed the time.

The guests and demonstrators never got physical aside from when a cookie was thrown down at those in line. Meanwhile, the main entrance to the center appeared useless as protesters refused to leave and police refused to act.

And when it finally did go off, obviously there were some prompt interruptions.

Because the secret to being truly inclusive and accepting is to literally stop other opinions from being heard.

During his talk, Yiannopoulos said of the protesters: “I don’t care about those people, because they are a tiny minority that has run rampant on campuses.” But he added their time is up.

You guys wondering how a blowhard like Trump got so popular, take a look in the mirror. Spoiler alert, it’s you.

[Story, photos via The College Fix]