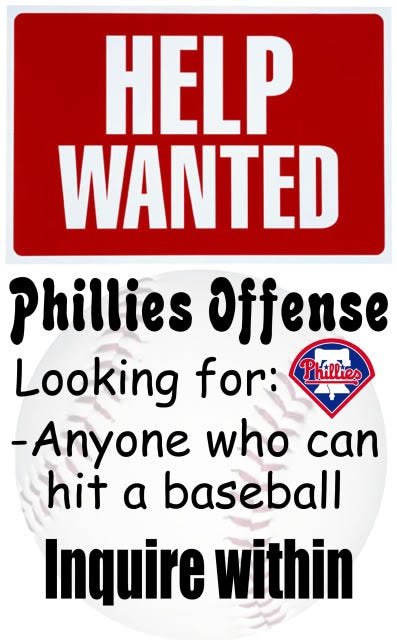 Are you surprised by this current run? 8 runs scored and 23 runners LOB over their past 4 games. A sweep by the powerhouse Cubs, the starting rotation of Adam Morgan, Jared Eickhoff and Vinny V getting wollaped, while the bullpen went 9 1/3 and giving up 0 ER. This has been the narrative all month long; The Bullpen Saves The Phillies, While The Offense Continues To Flounder.

We are who we thought they were my friends. An anemic offense who have caught a few lucky breaks over the first 1/4 of the season. And guess what, it looks like the offense if finally getting to Skipper, Pete Mackanin (via Philly.com).

“Somebody asked me a while ago, can we sustain winning all of these one-run games,” Mackanin said. “It is difficult.”
The Phillies managed just six hits against three Washington pitchers. Mackanin was candid when asked if he is worried about the offensive struggles snowballing.

“The bottom line is we are starving for offense,” he said.”We have to string three to four hits together and we’re not doing it. That helps you win a lot of games.”

Well no shit, Skip. They are horrific on that side of the ball. How about you address the fact that you took out Jeremy Hellickson with 79 pitches after 7 innings of 3 hit ball last night vs. The Nats. Let me repeat, 3 hits and 79 pitches. Hector Neris and Jeanmar are your 8th and 9th inning horses. I get it. But why the hell would you even consider bringing in Hector to throw that 8th inning yesterday. The man with the 4th highest innings pitched amongst all relievers in baseball. Especially after Hellickson was doing things like this.

I love Mackanin. He’s a players manager and has really brought the best out of this group of guys. But he is a dope sometimes and his in-game decision making is seriously lacking. Either that or the call to pull Hellickson came right from the top. Hellickson is the biggest trade chip in the organization right now and is only signed until the end of the season for a modest 7 mil. It honestly would not surprise me. The team has started to show their true colors, the Phillies are drafting first overall in just a few short weeks and the trade deadline is fast approaching. What is to come will surely be a treat for us fans I’m sure. And by that I mean plenty of losses.

At least we get to see Nola tonight. Owner of baseball’s best curveball according to Fangraphs. I don’t think I have ever wished the offense to get off the field, but I do when he pitches. #gophils