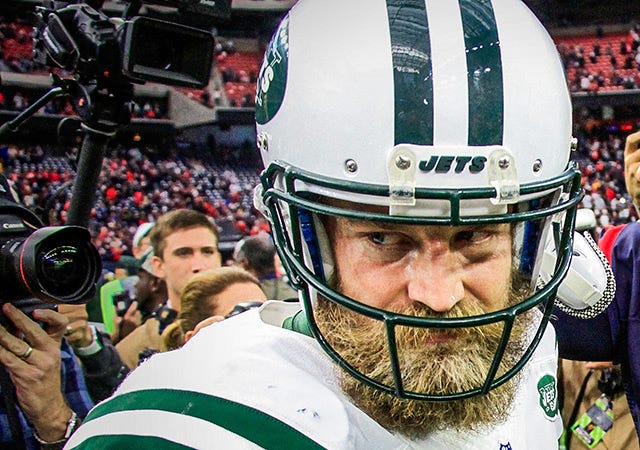 NYDN – Now that the Jets have violated the sanctity of their contract negotiations with Ryan Fitzpatrick by spilling the beans to every member of the working press on this continent, the truth remains inescapable: They’re still low-balling the veteran quarterback. The news that the Jets have offered a 3-year, $24 million deal, including $12 million in 2016 (plus fugazi incentives that could push the max value to $36 million), shouldn’t make the organization pound their collective chests. It’s still a below-market proposal that frankly should insult any quarterback coming off a 3,905-yard, 31-touchdown, 10-win season. The nearly three-month stalemate has some folks on One Jets Drive wondering if Fitzpatrick will ever return to help make a playoff push for a team with an aging core. Jets sources, including players, now believe that Fitzpatrick is amenable to spurning them on principle and taking less money to play elsewhere. They no longer think that Fitzpatrick’s return is a fait accompli.

Manish up to it again with his phantom “sources.” Making The Brou Crew look credible with their information. Ryan Fitzpatrick – already pissed off about being underpaid, is now going to go be even more underpaid, and probably play on a team thats not nearly as good as the Jets. Got it. Makes perfect sense.

We’re talking about football here. This is not baseball. Its not a sport where you decide to sign a contract near your hometown and play out some of your last good years for fun without really worrying about the consequences. You dont play football for the fuck of it. As we’ve learned over the past few years with doctors reports, suicides, and chronic health problems, you pay the ultimate price to play this game. Its the reason Fitzpatrick is offended and hesitant to sign for $24 million at the moment. So to think that Ryan Fitzpatrick would go play for another team with no playoff prospects leaving more money on the table is preposterous. Fitz is a proud man, but hes also a smart and logical man. (He went to Harvard, you know) And that move makes no sense. Have fun getting your brains mashed in for even less money with no chance of winning after bouncing on the very skilled receivers you just had a career year with! But you really showed the Jets!

This is a move that I’m sure any man with pride would want to do after feeling disrespected. But I guess my point is that I dont think its really disrespectful at all. Ryan Fitzpatrick will be 34 this season. I think getting $12 million for a man of his age, with his track record is more than fair. And even the lowball numbers of $6 mil the final 2 years of the contract make sense to me too. Do we expect Ryan Fitzpatrick to really perform at a high level when hes 36 years old? Even if you have faith in Fitz for the next few years, can you at least not see how he has less than zero leverage in these negotiations? Age, regression, roster turnover, and a league that rapidly changes all hurt a guy like Ryan Fitzpatrick from demanding big money over several years.

Ultimately I still think they strike a deal. Because like I said you dont go out there and risk your brain weekly on a whim for less money over a grudge. But its getting pretty wild here how little Fitz continues to budge. Gotta have a little self awareness. Even if you have supreme confidence that you will over achieve and succeed with the current Jets roster, understanding the simple business mechanics of this situation has gotta be humbling enough to take a 24 million dollar contract during the final good years of your career. If he were a year or 2 younger, or perhaps had a couple more years such as last under his belt with the Jets, he’d have some footing in these talks. But none of that is the case. Gotta face reality here.