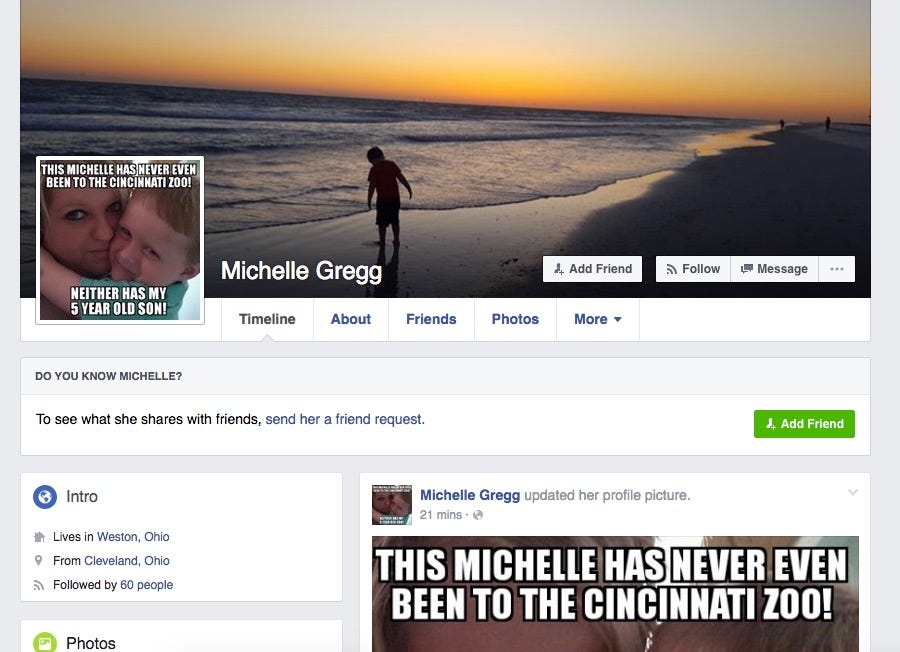 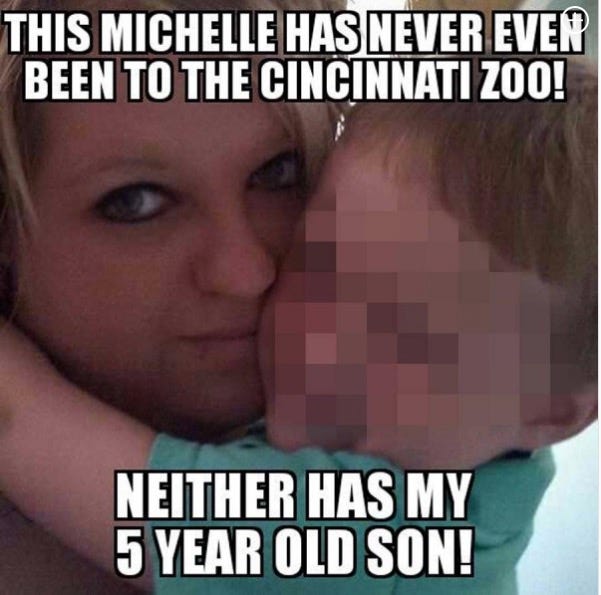 NYDN – Internet commenters have gone bananas over the death of Harambe the gorilla, and have begun throwing verbal feces at unsuspecting corners of the web.

Social media vigilantes vented their outrage over the 4-year-old who fell into the enclosure of the Cincinnati by targeting a woman they thought was the boy’s mother but actually just happens to share the same name.

Observers were quick to blame Michelle Gregg for the death of Harambe, who was shot dead by his zoo on Saturday after grabbing her son.

Some said that the primate was protecting the child, and said the beast’s life could have been saved if the boy’s mother had been paying more attention.

However, there is more than one woman named Michelle Gregg in Ohio, and at least one with no connection to the Harambe story received a flood of unsolicited hate.

First of all, nobody does it better than the New York dailies. I mean are you kidding me with that opening sentence? Internet commenters have gone bananas over the death of Harambe the gorilla, and have begun throwing verbal feces at unsuspecting corners of the web. Fire, fire, 1000 times fire. Exactly why I dropped out of journalism school, because I knew I could never hack it with those guys.

More importantly, I think we’ve all learned by now that maybe the worst thing that can happen to you in 2016 is to piss off the internet. Public shaming has become such a bloodsport that you’ve got people on high alert 24/7 looking for the next target to take all their anger out on and try as hard as they can to ruin their life. A close second? Having the same name as that target.

Michelle Gregg just found that out the hard way.

“Ur scum u need ur kids taking off u sick b—- u should’ve been shot dirty selfish b—-,” one woman said.

“U are a f—ing killer!!!!” said another gorilla expert.

Gregg shared screenshots of her replies to multiple messages, telling the senders to have a “blessed day” and informing them that the woman they wanted to torment had actually taken down her Facebook. 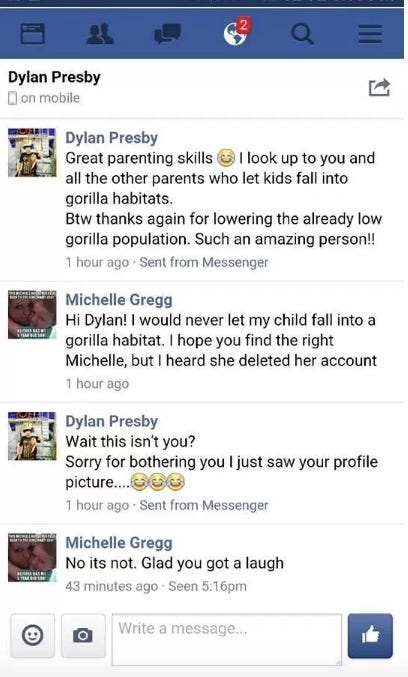 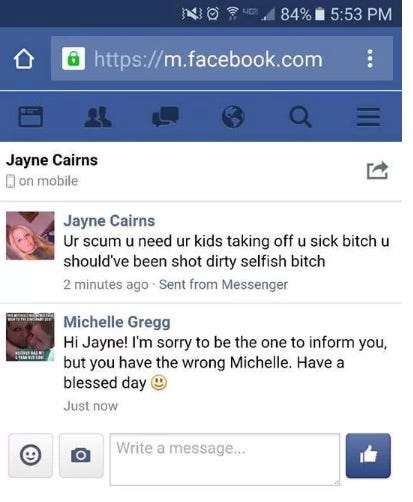 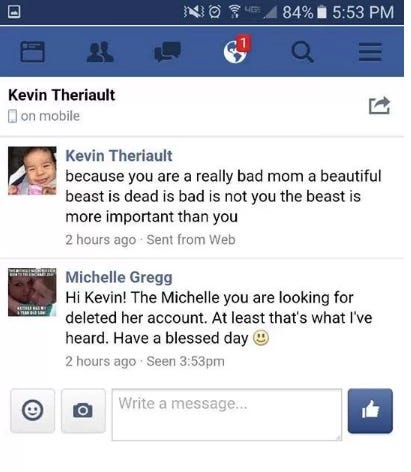 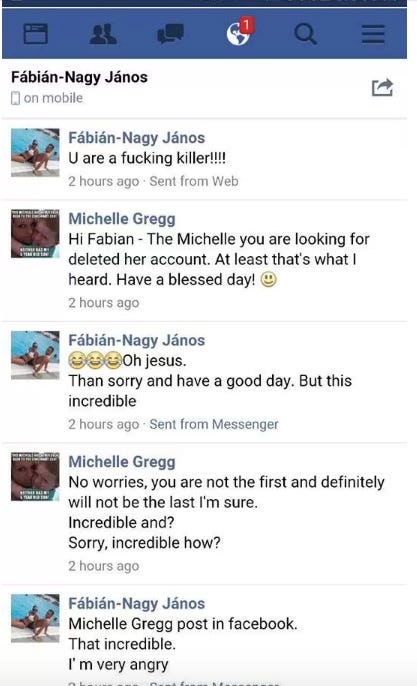 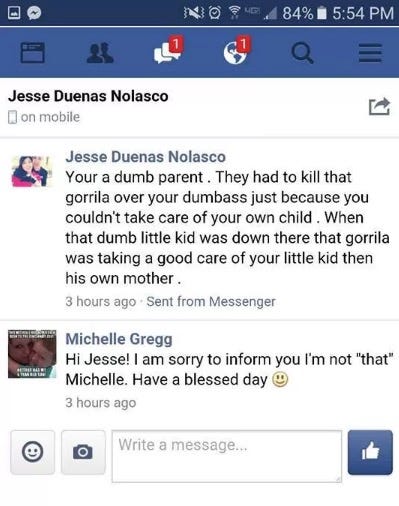 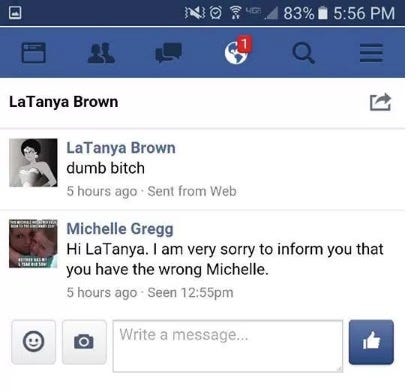 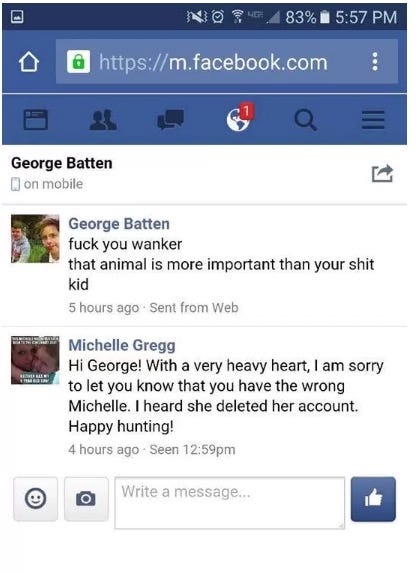 Poor lady didn’t even let her kid drop 12 feet into the cage of an endangered 400 pound gorilla that was promptly shot dead, still has to face the internet wrath for it. What an awful Memorial Day weekend. 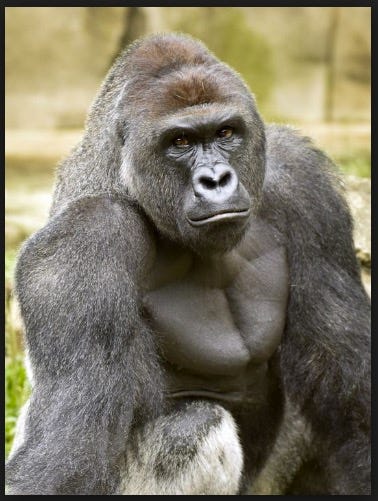