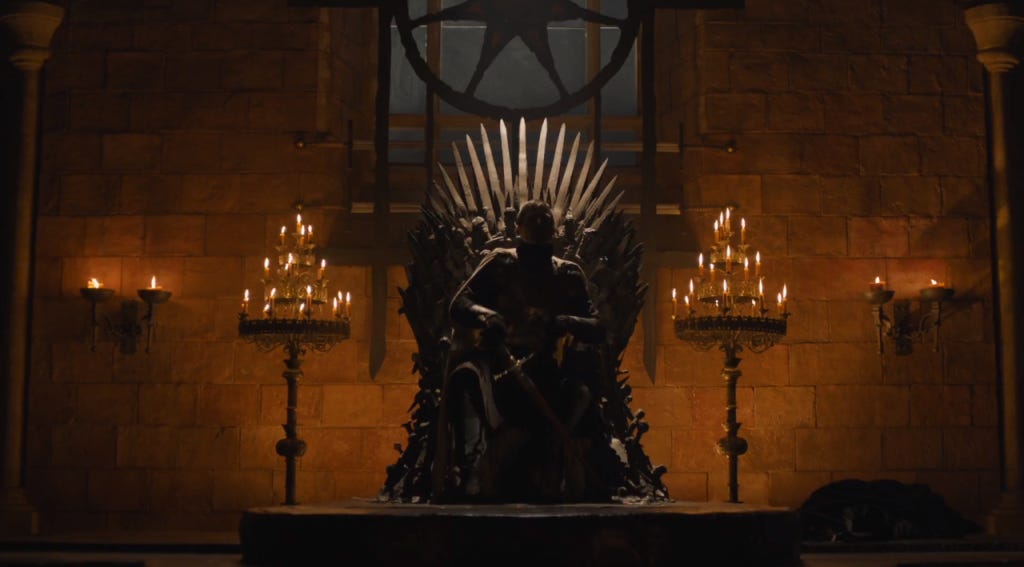 Much like all of you at your desks right now nursing hangovers and sunburns, Game of Thrones used this Memorial Day break to sort of mail it in. This episode was the worst of the season (not fully an insult given how terrific this season has been) and defined a “table-setting episode.” Still, even in slow Thrones episodes, there’s a lot to talk about, and we still have no reason to think of this season as being anything other than outstanding and that the final act won’t deliver spectacularly.

The biggest problem with this episode was the amount of time spent on Sam and Gilly which HOLY SHIT, it’s like the writers had a meeting where they went “How could we make a storyline that viewers can somehow care even LESS about than they did Dorne last season?” They should play a supercut of every Sam and Gilly scene on international flights so the passengers can sleep. The worst part of it is that unlike certain secondary characters that get a touch too more screen time than many viewers would like (Brienne Seasons 3-5 is a good example), Sam rarely is used as a foil to characterize others, and we don’t really learn anything new or significant about his character; Sam is a kind-hearted fat guy who has been mistreated his whole life, but is sneaky brave and unafraid to stand up for his moral convictions. We learned that all like, the second scene he was in. We don’t need to keep exploring it or an extended dinner scene to prove that point. Besides, if I wanted to see a Dad look disapprovingly at his son while I watch Game of Thrones, I’d look up from my laptop that I’m using to take notes on a show about dragons for the blog I work for.

Unless I’m missing something huge, and I rewatched the scene to make sure I’m not, the only significant thing to come of that sequence for the rest of the show is now Sam has in his possession a sword of Valyrian steel. Valyrian steel, for those who can’t remember, is one of three substances that can kill White Walkers (dragonglass and fire are the other two). Given Sam is already one of the more prolific White Walkers in all of Westeros with a grand total of one, you know that sword is going to be used to smoke some White Walkers, which means another battle with the White Walkers is coming. Remember the Chekov’s Gun rule from high school English, if a gun is introduced in a text, that means at some point it has to be shot. If a Valyrian Steel sword is introduced in Game of Thrones, at some point it’ll be used to kill white walkers. And not just any White Walkers, but probably one of these four guys.

But if we now have a Chekov’s sword to defeat the White Walkers, Chekov’s Uncle came back after a five year disappearance to provide additional support. Benjen Stark, a favorite amongst any self-respecting Game of Thrones conspiracy theorist, has returned to put an end to the rumors and speculation. What exactly Benjen IS is an interesting question in and of itself, being somewhere between a White Walker and a human. His mental state or consciousness as Benjen doesn’t seem to be changed in any discernible way, but what his powers are as part Walker (there has to be some right?) is a little unclear. When these powers reveal themselves and probably save Bran is more of a “when” than an “if”. Bran’s human status now that he’s the Three Eyed Raven is also foggy. A little bit like last week, we’ll break down what we know for certain about Bran in list form:

-Bran has Greensight, or the ability to see the past, without the use of trees. That’s how we can get visions into the past, which gives awesome Easter Eggs to people who like to pay attention to the backstory of Thrones (like Jamime Lannister sitting on the Iron Throne after slaying the Mad King, which is the picture above), a useful device to inform and contextualize pieces of Westeros history non-book reading viewers that are relevant or will be relevant to the current plot, AND a way to go back to answer the question that has beating on the inside of all of our heads for a few week now, what exactly happened in the Tower of Joy? (When we go back to the Tower of Joy again is another “when” not “if”.)

-Bran doesn’t fully understand his purpose but clearly the Night King (leader of the Walkers) does, meaning his role in the upcoming battle against the undead is incredibly important and something that was foretold by someone.

-Still can’t walk though. I guess even magic doesn’t go as far as stem cell research.

And that’s about all we know about Bran. We know far more about where Bran is currently than his intent or purpose, and I don’t think even he knows. I guess *puts on extremely Dad joke voice* FOR A GUY WHO CAN SEE THE PAST HE DOESN’T KNOW A WHOLE LOT ABOUT THE FUTURE.

To wrap up everything going on in the North, the BLACKFISH IS BACK, the totally badass character who you must likely completely forgot exists! Remember the guy at Catelyn Stark’s father funeral who gets frustrated at the guy missing all the flaming arrows, rolls his eyes, and shoots it himself? It’s that guy. We don’t know a ton about him other than he’s your prototypical Northman (UPDATE: He’s not from the North, I got confused and thought the Riverlands were in the North. Whatever, the rest of it holds true): Hard as iron, tough, loyal until he dies, loves to fight. And now that he’s taken Riverrun (Hey Petyr Baelish told Sansa the truth. Maybe he does actually want to help her?), even more chaos will ensue as the Boltons slowly lose their hold of the largest kingdom in Westeros. The most exciting possibility I can think of for Riverrun is that Jaime is riding for the same place as Brienne, the woman he bore his soul to, gave his sword and Tyrion’s squire, and only person in the world EITHER of them know who has a fully healthy respect for one another. Except now they’re going to be on opposite sides. Which means UH-OH BRIENNE, THE PERSON WITH THE MOST RIGID MORAL CODE IN THE ENTIRE SHOW FOR THE FIRST TIME HAS A LEGITAMATE MORAL DILMENA WHERE IT’S UNCLEAR WHAT THE RIGHT THING TO DO IS EXCEPT BEING RIGHTOUSLY INDIGANT ABOUT HOW HONORABLE YOU ARE!!! Does Brienne have it in her to stab Jaime with the sword he gave her, if Sansa wants her to do it? God I hope we get to find out.

Let’s get to why Jaime is being sent to the cold in the first place, which is his born-of-incest son, Tommen, continues to be the softest person I have ever seen on television and I am a Knicks fan who has spent a lot of time watching Danillo Gallinari and Andrea Bargnani play basketball. Him stomping out at the top of the steps to announce the alliance between the Crown and the Faith should have been accompanied to Stone Cold’s glass shattering entrance music, but the exact opposite. Want to hear my super hot flaming take on what’s going on in the capital? Everyone who suspected that the Sparrow is a Machiavellian politician who wants to install a theocracy with him at the top, not a high-handed holy man, have been proven right. Maergery Tyrell in my opinion is too smart and too strong to have been broken or brainwashed by him. Maergery knows she has had Tommen in her front pocket since the time he saw her crawl into his bedchamber, which to be fair, I have been in her pocket too since that one dream I had about her one time. Maergery cares most about her brother Loras and her own position of power inside the royal court, not her new Baratheon last name. Do you see where this is all leading? A Maergery-Sparrow deal makes too much sense for the two of them: Loras is released without harm (relatively), Maergery gives Tommen to the Faith so they have their piece, Maergery all of a sudden is the true puppet master controlling the King by him trying to follow her new bullshit religious values, and the only one getting bent over a barrel is Tommen but he’s too stupid and weak to realize it. I could be wrong, but I doubt it.

And to finish the recap off, Arya finally did what so many of us expected her to all season and left the Faceless Men. As soon as we saw the way Arya was reacting to Joffrey’s death in the play, it was a wrap: she still hates that dead blonde-haired prick as much as we all still do, which means she remembers who she is deep down. Arya has too deep of a sense of justice to kill a good person who doesn’t deserve it, especially after a meaningful conversation where every line had a blinking neon sign around it that read METAPHOR! METAPHOR! METAPHOR! Arya telling Fake Cercei that the real Cercei wouldn’t just weep, but would want revenge on the people who took everything away from her was my favorite part of that exchange. I’d expect the second Stark girl to come back to Westeros with a vengence, ready to finish off the list she started in her head so long ago. I always thought the fact she never threw away Needle was symbolic of her identity as a Stark always being a present part of her, and her getting Needle from it’s hiding place is her reclaiming that identity. Now she has one of the most deadly assassin orders after her, and last we saw her she was blowing out a candle to be in pitch darkness, which would be useful if you wanted to:

-Fight in the dark

But who would want to fight in the dark? That seems completely useless, unless you have done some really crazy training like living as a blind beggar where you’ve learned to fight without seeing for the past few months, and that would give you a huge edge over someone more skilled than you. But who does that?

Well that’s it for the recap. Follow me on Twitter where you can ask me questions or shoot the shit about anything Thrones related @CharlieWisco .

Also, listen to the Game of Thrones podcast me and Clem do at the bottom. It was a little rushed this week because we were trying to finish in time for the Game 7 tipoff. And buy one of our two Game of Thrones shirts! The only warning it comes with if you’re a guy, your arms might get tired from fighting off all the women who will mob you when you wear it. And they come in women’s sizes too, so all the ladies can show their devotion to a dead simpleton Giant and an alcoholic dwarf to let all the men in your life that you truly do care more about what’s on the inside than the outside. 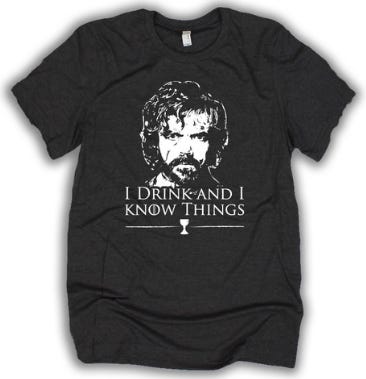 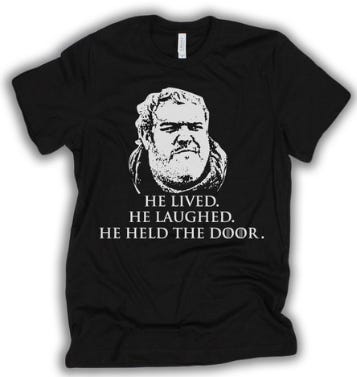 I Drink And I Know Things Tee

I Drink And I Know Thing Tank