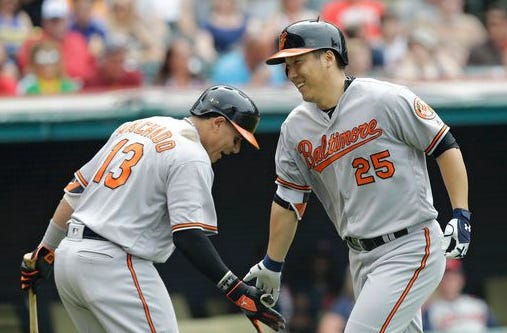 Thank god that road trip is over. Bad news is they went 4-5 on the trip, good news is they won 2 of the 3 series, but they are coming home for four huge games against Boston starting tomorrow.

To be honest, I’m not thrilled with Jimenez being scheduled to start the last game of the series against Boston, because he has been god awful recently. Just look at his last 3 starts.

Very nice of him to give the O’s that 1.2 IP yesterday, game was over before it even started. He 100% is a liability for this team, and no one has confidence he can turn it around. And with Mike Wright struggling lately too, that gives you two guys in the rotation that likely won’t go 5 and you’ll have to use the pen for an extended outing. When Yovani Gallardo comes back, it will be interesting to see what the Birds do with these guys. If we’re being honest, I’d love to see both guys get taken out of the rotation, bad news is there is no one waiting to take their spot. Chris Lee has some decent numbers down in Bowie, 5-0 2.98 ERA, but scares people because he doesn’t miss bats, only 19 Ks in 51.1 IP. He isn’t the answer, but neither is Ubaldo. I guess you have to try and put him in the bullpen and have him wait it out like he did in 2014. No matter how you look at it, Ubaldo has been garbage this year, and you can’t keep trotting him out there every 5 days, you just can’t. With all due respect Ubaldo, get the hell off of this team.

Another great sight from this Cleveland series was Hyun-Soo Kim getting ahold of one and hitting his first career MLB home run. All the guy wants to do is hit, and he has forced Buck’s hand by performing well. He’s started 5 games in a row, and has 7 hits in 18 at-bats, including his first dong. Keep on hitting, and he’ll keep being in this lineup. Plus, the more he is hitting, the more we can hear his theme song.

Huge showdown for first place with Boston in town for 4, and then JJ and the Yankees for the weekend. JJ and I will be at Pickles Pub on Saturday so come drink some beers with us.