CINCI – “Cincinnati police and emergency crews responded to a report of a child falling into the exhibit at the Cincinnati Zoo & Botanical Garden at about 4 p.m. Saturday. Police confirmed the child was taken to Cincinnati Children’s Hospital Medical Center near the zoo, and was treated for serious, but non-life threatening injuries.

Cincinnati Zoo President Thane Maynard said the boy crawled through a barrier and fell an estimated 10 to 12 feet into the moat surrounding the habitat. He said the boy was not seriously injured by the fall.

“The choice was made to put down, or shoot, Harambe, so he’s gone,” Maynard said. “We’ve never had a situation like this at the Cincinnati Zoo where a dangerous animal needed to be dispatched in an emergency situation.”

The fire department release said the boy was in between the gorilla’s legs at the time of the shot.”

Absolutely wild. You see a headline like that and see the grainy video start going around Twitter and you instantly think, India…not the god damn Cincinnati Zoo in the middle of America. Spending a nice casual Memorial Day Weekend checking out the exotic animals, take a peek up from your camera and oops, your 4 year old is 12 feet below getting dragged through a river by a 400 pound gorilla.

Maynard said the zoo’s 17-year-old male western lowland gorilla, Harambe, grabbed the boy and dragged him around. Two female gorillas were also in the enclosure.

The boy was with the 400-pound animal for about 10 minutes before the zoo’s Dangerous Animal Response Team deemed the situation “life-threatening,” Maynard said.

Naturally everyone instantly took to social media to crush the parents here, but come on now. He’s 4. That’s what 4 year olds do. You can’t keep your kids on a leash (except for those people who do, complete psychopaths). I blame the zoo 100%. How do you have a gap around a freaking 400 POUND GORILLA pit that a 4 year old can easily crawl through? You know you’re a zoo right? And your major customer base is tiny little 4 year olds? Lawsuit city coming right up. Not to mention an UNREAL story for this kid for the rest of his life for every party and first date. 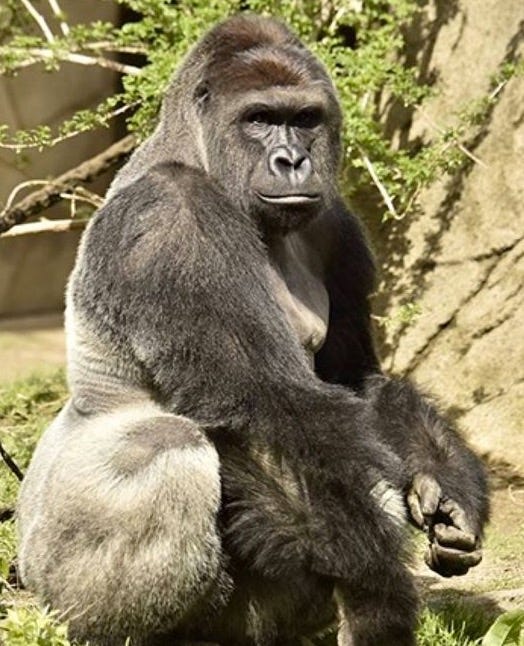