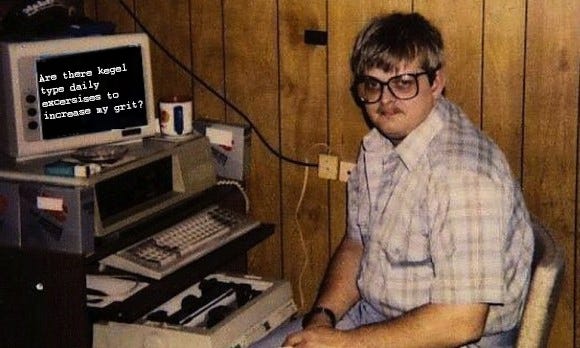 We took last week off in honor of Memorial Day Weekend and also to get blind drunk on Carb Day at the Indy 500. In the meantime the questions piled up in the old inbox so lets dive right in. As a reminder- if you have any questions about barstool sports please email me at BarstoolOmbudsman@gmail.com and I will do my best to repsond to them.

Is Grit Week going to be an annual thing? I think it just passed Shark week as the best weak of the year.

Shark week jumped itself last year with that fake Megaladon special they presented as a documentary. They lost the trust of there viewers and meanwhile it left a huge gap in the Summer Weeks of Things category. As for Grit Week, once a year could be a realistic option but it was almost a little too much living for one man to experience over the course of 7 days. I cried, laughed, puked, laughed til I cried, puked til I laughed, laughed til I puked, puked til I cried, got drunk and came over the span of a week. There were times I considered just setting up shop on the RV and become a bus person. There were also moments when I thought I was going to die on the bus, and frankly that would be ok with me if we had crashed in a blaze of content because I knew that people would make jokes about our memes being so fire that they exploded the bus and that would be kind of funny. To answer your question, we have made tentative plans to ressurect Grit Week in the fall with a weeklong slate of MAC and subpar NFL games. Stay tune for any updates.

Whats the whole big deal with Mickelson and this insider trading? Don’t Schefter and Rapaport basically make their living off of insider trading? They get inside information before it is released to the public but they get praised for it? Doesn’t seem right.

Also as far as I’m concerned with Rapoport, he works for the NFL so he gets paid by his company to know things that they tell him, so in other words he gets paid to read his emails which is actually a pretty perfect job description of 90% of all indoor jobs. My understanding of financial law is that Rapoport is allowed to profit off secrets about players being dealt since the NFL is not a publically traded business.

Hope this doesn’t make me sound too stupid, but as a girl I feel I need a clarification. How does viagra work? I’ve never been with someone who needed it (humble brag) In terms of when a guy takes it, does it cause instant boners he can’t control or when a guy takes it, when a sexual moment arrives in a given amount of time then the guy has an easier time getting a boner? I guess I just didn’t imagine you pop a pill and instant boner. The commercials have led me to believe you take the pill and “then you are ready when the moment is right” (as you hang curtains together on a sunny day with her butt in your face) since normally men who take it have a hard time getting a boner. Or are sitting in an RV with friends. So- instant uncontrollable boners or more readily available boners over time? Thanks for your wisdom on this.

First off, what a electrifying way to start a sentence. I’m going to start using “Hope this doesn’t make me sound stupid” whenever I’m in court, approaching chick’s at a bar or sucking air out of a balloon.

As a man, maybe I can help you understand how to feel as a woman about guys taking Viagra. Not that I’ve ever needed to use it. Never had that problem but it does sound like a blast. Cialis is what we call a just in case option. It only gives you a boner if you do something that would make you aroused like sitting in seperate bathrubs, making eye contact with a ovulating woman, or Feitelberg watching All-22 of Tom Brady.

Viagra on the other hand is like a easy button. You pop one and a half hour later your crotch looks like a lying italian puppet. It offers very little control to the user it has one job and it does it well. Taking Viagra is like signing Mike Wallace to a NFL contract. You know what your going to get and it might not always be appropriate for the setting or situation, but if you need to score immediate its not a bad option.

Why is it I cannot post comments on Barstool without getting a ‘no server’ message? Why? WHY? WWWHHYYY?
-Ken

Ask your mom to hang up the phone so you can get back online. As we’ve addressed here- the site and ap will go through some pretty big changes late summer so expect all of your takes to be welcomed under the new system.

What would your opinion of a girl alone at a bar be?

It takes more courage for a girl to hang out alone at a bar by herself then it does to light yourself on fire to protest a war. In a vaccuum, I think its cool but I would never have the guts to do it myself. I would rather give birth to twins than be a single girl at a bar. Its like going to a state fair and there’s only one roller coaster except the roller coaster has to make awkward small talk with everyone who tries to ride it. That said, sup?