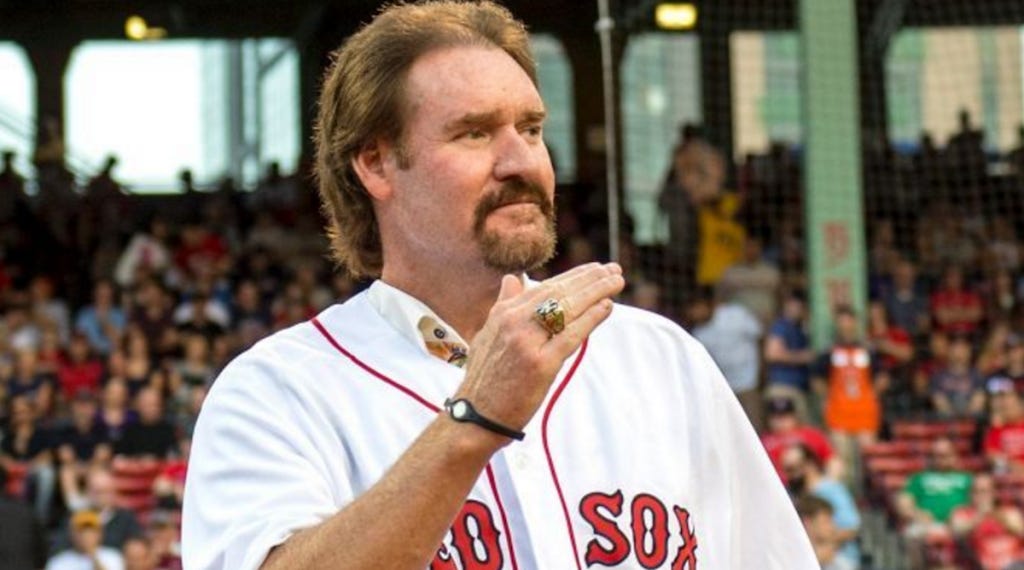 Last night, before their game against the Colorado Rockies, the Red Sox honored the 1986 American League champion Boston Red Sox team. Being that it’s 2016, the Red Sox are “celebrating” the 30-year anniversary of the 1986 team, which makes me a little uncomfortable, given how that season ended and how this one has been going. But the ’86 team was in town, because the Red Sox are retiring Wade Boggs’ number 26 tonight, so I guess it made sense to at least bring the guys out on the field for a quick ceremony.

During that ceremony, Boggs could be seen wearing his 1996 World Series ring that he won with the New York Yankees. Probably not the smartest idea. I mean, I wouldn’t have done it. That, and Boggs hasn’t exactly been viewed in the most positive light since his departure from Boston in the first place. Sure, the Red Sox didn’t offer him a contract before he ended up signing with the Yankees, but then there’s the whole thing about him trying to take money from the Tampa Bay Devil Rays to wear their cap on his Hall of Fame plaque when his best years were in Boston. The Hall of Fame stepped in, and forced him to have a Red Sox cap on his plaque.

There’s a reason why it’s taken so long for the Red Sox to finally decide to retire his number. Baseball-wise, he had a slam dunk case. It’s the other shit — shit like this — that have caused the holdup. It’s not like he wears that World Series ring every day, so it was obviously a conscious decision to put it on for that ceremony. Was it a “fuck you” to the Red Sox for not offering him a contract 24 years ago? Possibly. Was it a “go fuck yourself” to the Red Sox for taking so long to retire his jersey number, 11 years after he was inducted into the Hall of Fame? Maybe. But he had to know that wearing that World Series ring would piss off Red Sox fans, despite the message he might have been trying to send to the organization, if that was what he was even trying to do at all. It had to have been something like that, because there’s no logical explanation as to why you’d go out of your way to wear a Yankees World Series ring for the celebration of a Red Sox team at Fenway Park.

It just didn’t piss me off, personally. Why? Because who fucking cares anymore? 1986 was the 1978 for the generation before, and the 2003 for my generation. It hurt, and it hurt bad. But the pain of those seasons has been drastically reduced since 2004, 2007 and 2013. If Wade Boggs was your guy back in the day, then I can see how it might rub you the wrong way. Or maybe you never even got to see him play, and it still ruffles your feathers. I don’t blame you at all for feeling that way. I don’t agree with any potential logic that could have existed behind the decision to do it, but it just doesn’t bother me the way that it would have prior to 2004. You can wave your 1996 ring around, and I’ll wave my 2004, 2007 and 2013 rings. Do you, Wade. But don’t expect Red Sox fans to have your back on this one.