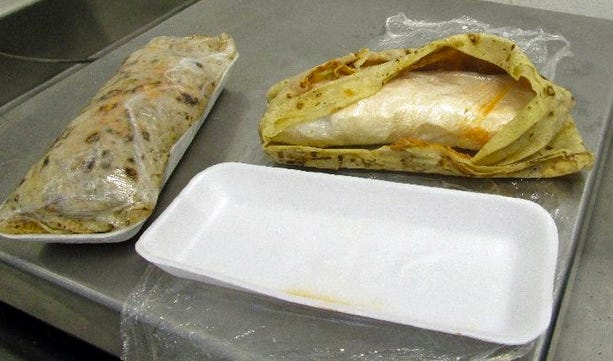 HP - Customs and Border Protection (CBP) officials in Nogales, Arizona, arrested a woman on Friday for allegedly trying to smuggle a pound of meth into the U.S. inside a burrito. Susy Laborin, 23, was trying to re-enter the U.S. via a pedestrian gate carrying what looked like a bag of burritos.

After a drug dog sniffed out the presence of drugs in the bag, officials took a peak. One of the burritos had no guacamole, carne asada or pico de gallo, but it did have about a pound of meth, estimated to be worth around $3,000, CPB spokesman Rob Daniels told the Tucson Sentinel. Investigators said Laborin, a resident of Nogales, admitted she knew the burrito was stuffed with meth, according to a complaint obtained by The Smoking Gun.

Hey Chipotle, pay attention. This is how you get your people back. This is who you put that whole E Coli thing behind you. How? Meth burritos. A genius move to get people in the door and keep them coming back. It’s a pretty simple solution for a company that has not had a good year, to say the least: 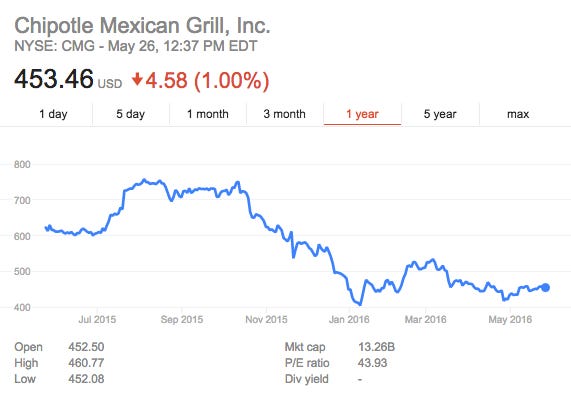 So what are their options:

2) Put queso on the fucking menu, you assholes. There’s nothing crazier than Chipotle not having queso. They say it’s because they can’t figure out a way to make an all natural queso without preservatives or anything. Hey Chiptole, to quote my friend Daniel, FIGURE IT OUT. You’re motherfucking Chipotle! Chipotle’s revenue for 2015 was…wait for it…4.5 BILLION dollars. I don’t want to go back to this old cliche, but we can send people to the Moon, we have a camera snapping pictures of Pluto which is 900 trillion miles away, but Chipotle can’t figure out how to make queso? Get the fuck out of here with that soft serve.

3) Meth. Slip a little bit of that good blue in there and watch profits fly through the roof. It’s not the most kosher way, but desperate times call for desperate measures.

PS: I’m pretty over Chipotle. It used to be something that it’s not anymore. Remember when Chipotle was coming up in the game and everyone would freak out about the size of the burrito and how awesome it was? Not anymore. They’ve gotten away from what used to make them great. Now I feel like they put 3 tiny little pieces of lukewarm chicken on it and call it a day. So sick of those little lukewarm burritos that they can’t even figure out how to put hot queso on.