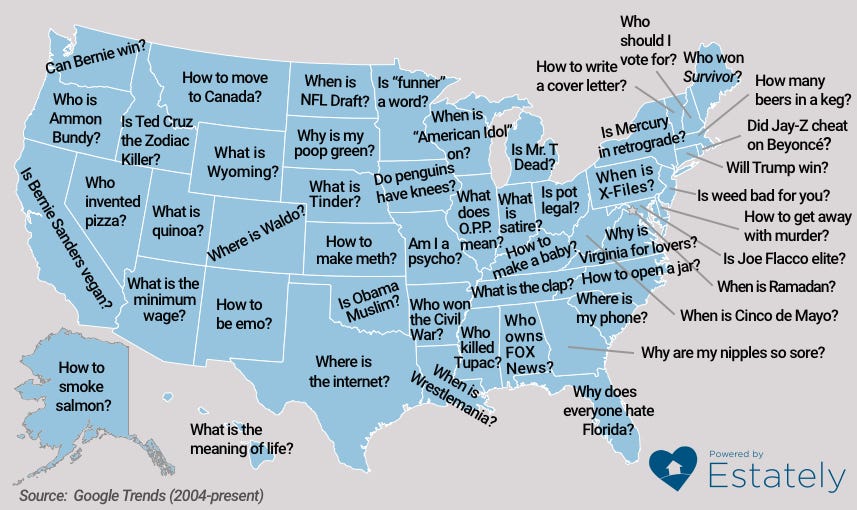 Estately- Americans have no shortage of questions, and the internet no shortage of answers. Whether looking for advice on buying a home, or determining the religious beliefs of politicians, Americans frequently turn to the world wide web for answers. Here at Estately, we were determined to find out what questions internet users in each state asked more frequently than others. What we uncovered was both inspiring and depressing.

Using Google Autocomplete we compiled hundreds of the most common questions Americans type into the Google search bar. We ran those searches through Google Trends to determine which state queried each of these selected searches the most over the past 12 years. To be clear, the list below does not represent what each state Googles the most, it simply shows the searches each state Googles more frequently than the other 49 states and the District of Columbia.

Just like most of the maps we slap up on this site, this map makes no sense and perfect sense at the same time. Now before I break this down, let me open another tab in my browser so I know which state is which.

– First of all, are you serious Maryland? Stop feeding the stereotype! Is Joe Flacco elite has been a running joke on the internet for years and yet the eternal flame still burns bright in the birthplace of the question. That being said, I am shocked that it wasn’t something flag related. People from Maryland love their flag as much as they love hearing people say their team’s starting quarterback is elite.

– Alaskans asking how to smoke salmon has to be the most embarrassing question on the list. What kind of fake ass wildlings are you guys?

– That is the first and last time North Dakota will ask when the NFL Draft is. Next year’s North Dakota question will be “Why are Eagles fans such assholes?”

– I don’t know what the FUCK “mercury in retrograde” is, so I just became a statistic and Googled it. And I still have no clue what it is. Be better, New Yorkers.

– West Virginia asking “When is Cinco de Mayo” is the perfect question for West Virginia to ask outside of “What’s the best way to season roadkill raccoon?” and “Do you need a prenup when marrying your cousin?” And I guarantee West Virginians spelt is “Sinco day Mayo.”

– *Wayne Brady voice from Chappelle Show*
“Does the North have to march on Arkansas and remind them who won the Civil War?”

– Just another example of Cali being Cali by asking if Bernie Sanders is vegan. Can the Golden State grow a backbone for me one time?!?! You have a bunch of cool cities, beautiful weather, even more beautiful girls, and another million great things. And you still ask shit about vegans and yoga. Pussies.

– Idaho not knowing that Ted Cruz is indeed the Zodiac Killer is downright embarrassing.

– Jesus Christ, Trent. You and your fellow Iowans just blew my mind. Do penguins have knees? I feel like this answer is in the 90% of our brains that humans don’t use. And I can’t get on Nebraska for not knowing Tinder since they are probably all getting laid from FarmersOnly.com.

– Between the “How To Move To Canada” as well as all of Phil Jackson’s bullshit the last few years, lets just give Montana to Canada. Get the fuck out of my country, Montana. Abe from The Challenge is your problem now. 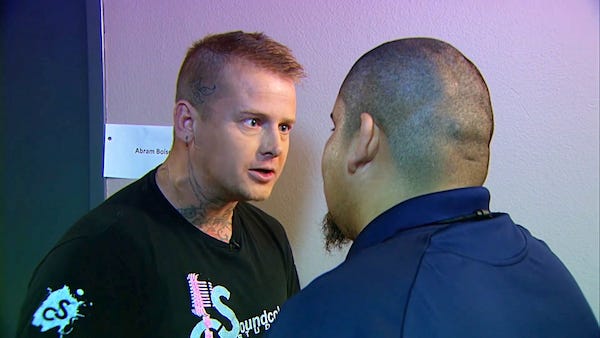 – What is Wyoming?!??! Hahahaha you stupid Wyoming motherfuckers!!! Canada, you can take Wyoming along with Montana. Just give us all of Vince Carter’s Raptors highlights in exchange.

– Hey Florida, you know why everybody hates you? Because you are full of alligators, meth heads, and convicts. All three of those things suck. And I should probably include STDs into that list too.

– Shout out to the people from Kentucky that put the answer from “How to make baby” with people from neighboring Tennessee that asked “What is the clap”. So incredible Kentucky and Tennessee.

– I can’t get on Massachusetts for asking how many beers are in a keg. I’ve asked and forgotten the answer to that more than the Die Hard 3 “Four Gallons” riddle.

– No Deflategate questions out of New England was actually a little surprising. By the way, I saw this today. Somehow it feels like less than 500 days and more than 500 days at the same time.

– Don’t hang your head Illinois. I can’t tell you how many white people sing O.P.P. without knowing what it stands for.
(FYI, it’s Other People’s Pussy. Do you feel weird for hearing it around your parents now?)

– Jesus, Maine. “Who won Survivor?” Your minds are going to be blown when cable and Netflix makes their way to you.

– If you are a Missouri resident that does nothing but talk about how the Cardinals are the best fans in baseball, then yes you are a psycho.

– Georgia your nipples are sore because you are probably wearing a mesh shirt with no undershirt or are pregnant. Or both.

– “How to get away with murder”, huh Delaware? Not making any Delaware jokes here then.

– Fuck Michigan for even putting the thought of Mr. T being dead in my head (I admit it, I Googled it to make sure he was still alive after seeing it on the map).

– New Mexico NOT asking how to make meth was surprising until you realize it’s probably taught along with tying your shoes and the ABCs. But asking “How to be emo?” is by farrrrr the lamest thing on this map.