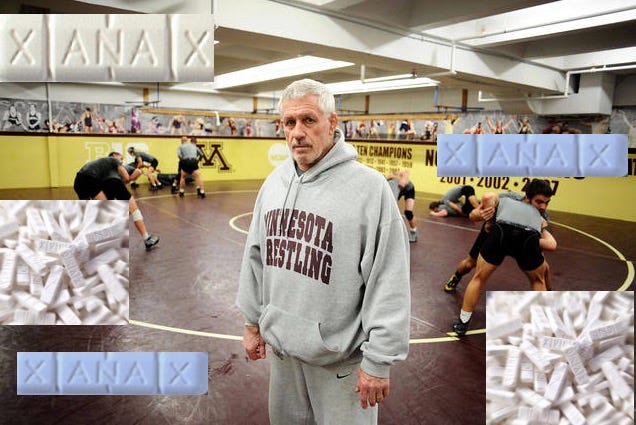 MINNEAPOLIS (KMSP) – The Fox 9 Investigators have learned four Gopher wrestlers at the University of Minnesota are under investigation for dealing the prescription drug, Xanax. Ten other players are suspected of using the anti-anxiety drug.

In March, an informant told U of M Police the players called it “Zanny” and were selling it for $5 a pill, using it with caffeinated sports energy drinks to get high.

Star Tribune – Gophers wrestling coach J Robinson collected about 1,400 pills of the prescription sedative Xanax that members of his team were ready to sell, yet did not report the drug issue to police, one wrestler told the Star Tribune on Wednesday.

University of Minnesota officials confirmed that campus police are investigating alleged drug abuse by members of the wrestling team but would not comment further.

The wrestler, who spoke to the Star Tribune on the condition of anonymity, said he talked to police about Robinson’s handling of the team’s Xanax issue.

Lot of anxiety on the Minnesota wrestling team. Lotttt of anxiety. These guys allegedly got their hands on 2,500 pills mailed to them by a former wrestler and promptly started selling them all over school:

The source said that at one point, four teammates had a stash of 2,500 Xanax pills they had obtained in the mail from a former teammate and were selling from the 17th Avenue Hall dormitory on campus.

“It was $5 a pill for anyone on the team and $8 for anyone else,” said the source, who estimates that 10 to 12 members of the team were abusing Xanax. He said wrestlers also sold pills to athletes from other Gophers sports.

In late March, less than one week after the season ended, Robinson called a team meeting, the source said.

“He said, ‘It’s Easter weekend. I’ll be in my office Friday, Saturday and Sunday. If you’re involved, come and tell me. If you have any pills, bring them to my office and I’ll dispose of them, and I’ll give you amnesty.’?”

“Half of it went in the river, and half of it went to J. I know for a fact the people who were selling it dumped it and gave him about 1,400 [pills].” The source did not elaborate on the dumping location.

And the ones they didn’t sell they took with “caffeinated beverages” to get high. Allegedly. Wasn’t long before Coach J Robinson (where is the rest of your first name?) found out and dealt with it harshly:

Robinson tried to handle the Xanax issue internally, the source told the Star Tribune. He ordered suspected users to undergo mandatory urine testing and had them write a one-page essay. On April 5, the coach texted some team members with a reminder about their assignment.

Robinson’s text, which was obtained by the Star Tribune, said: “Remember that paper is due on my desk by tomorrow evening. #1 What emotion you’re feeling by getting caught, by letting yourself, your teammates, your parents down, how did it feel and do you want to feel that way again? #2 what did you learn from this? 3 what are you going to do different. Your plan so does not happen again.”

Lot of people acting all indignant and self-righteous, whipping out their best *sarcasm* voice to make fun of this strategy. Those people have no idea what it means to be a coach. Team, team, team. Protect the team. Help the team. If the team fucks up you don’t just kick them out and expel them and call the cops, you help them learn from their mistakes and deal with their emotions and grow as young men. Doesn’t matter if that fuck-up happens to be cheating on a test, a fight at a party, or a gigantic Xanax distribution ring – you help your guys through it. And while you’re doing that you confiscate 1,400 of the pills for yourself obviously, dealing with college kids is stressful as a motherfucker.

And not for nothing, but this source is such a narc ass bitch it’s not even funny.

The source told the Star Tribune, “I only [spoke to police] because I felt like it was the right thing to do.”

Snitches get stitches you cauliflower-eared motherfucker.