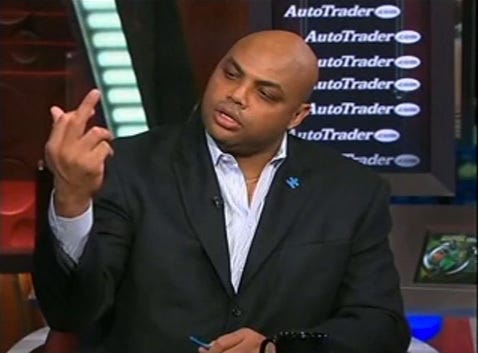 SFGate – Charles Barkley, the soft-spoken TNT analyst who has been a huge fan of the Warriors since Day One, was challenged to a fight on Sunday for picking the Oklahoma City Thunder over his beloved Golden State. Wait. That’s not right. Let’s try that again. Charles Barkley, the notorious Warriors-hating TNT analyst, was challenged to a fight by an overzealous fan at an Oklahoma City hotel bar on Sunday, for picking the Thunder over Golden State. The scene, according to USA Today sports writer Sam Amick: There was pressure building on Sunday night at a hotel bar not far from the Thunder’s home, where a wayward Warriors fan was so enraged that TNT analyst Charles Barkley picked the Thunder to win the series that he challenged him to an actual fight (security was called, and the man was removed). No other details are known about the almost-fight, but Sunday’s loss against the Thunder was a tough blow to the ego for Warriors fans. (Not to mention Wednesday’s loss, as well.) Despite how ill-advised picking a fight with 6’6″ Barkley is, one has to admit that it took a lot of guts to stand up to him. Even if it does get you kicked out of a hotel bar.

This guy better count his blessing security got in between him and Sir Charles. If Chuck was hungry he would’ve been eaten alive. Forget about Barkley currently being a hefty 6’6, 300+ with mitts that could crush a human head like a melon. This man was one of the toughest players in NBA history on and off the court. He’s never backed down from a fight. Shit, one of my favorite quotes ever was from after throwing a guy through a 1st floor window in a bar, Charles stood in front of the judge.

Judge: “Your sanctions are community service and a fine, do you have any regrets?”

Charles: “Yeah I regret we weren’t on a higher floor.”

You don’t fuck with this man, plain and simple. But that’s not even the point of this. Why would you want to fuck with Sir Charles? The man is one of the best people/personalities in all the land. When Barkley is back in the Delaware Valley (like he is every Summer), I’m always on a full on perimeter search of every dive bar, casino, whorehouse, gas station, residence, warehouse, farmhouse, hen house, outhouse and doghouse in the Philadelphia area. Why? Because he would be the best guy in the universe to shoot the shit with. I NEED to by him a crappy beer only for him to call it turrible. In fact, it’s been confirmed Charles Barkley is one of the chillest famous people in the world. If you see him out he’s very, almost scarily, approachable. As long as you’re not a certified dickweed like this guy wanting a fight or that asshat DJ’s in San Antonio, Charles will be welcoming. He’ll even probably buy you a round or 12. The man’s the man. Although, this doesn’t apply to if you see him at the casino, which is basically every minute when he’s not at a bar. You never poke the biggest African-American bear in the room when he’s either spewing chips or rolling hot on a heater.

We all are, Chuck. Every single one of us.