Technically speaking, the Spelling Bee is already going on right now but if you’re watching preliminary action on ESPN3 today then you’re either a psychopath or a degenerate gambler or a bit of both. The real action gets going tomorrow morning and as long as Lenny Dykstra is a man of his word, which I have no reason to believe otherwise, then he’ll be there live tweeting the whole thing. Just think about this for a second. Think of all the ammunition Nails will have to work with. You’ve got little tiny nerds from all over the place. You’ve got different races, different religions, a bunch of kids whose names are even harder to spell than the majority of the words. And you’ll have Lenny Dykstra, yes THIS Lenny Dykstra…

… commenting on the whole thing. Just imagine what will come once he gets a look at the first kid who is anything like Jacob Williamson.

It’s going to be a bully’s wet dream (kinda weird talking about wet dreams and kids in the same sentence but you know what I mean). He’s going to stuff so many nerds into so many internet lockers that heads will be spinning. The best part is that we’ll have the youngest contestant in Spelling Bee history this year. Some little 6-year-old from San Antonio. The kid is going to be drowning in tears when he gets knocked out and Nails is going to put those tears in a syringe and make himself an HGH cocktail.

Sidenote: Lenny Dykstra has only been on Twitter for like 2 weeks but already feel like he’s deserving of a Top 10 Tweets post. In a world where most people on Twitter suck–myself included–Lenny is one of the true Must Follows. Plus it looks like he’s already on the fast track to becoming a Stoolie. 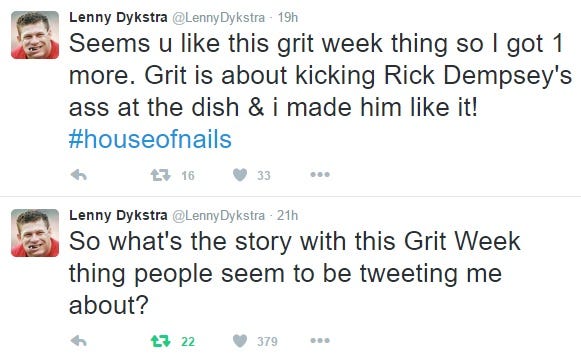