DETROIT — Phillies manager Pete Mackanin made a strong statement Monday night when he benched his best hitter in the seventh inning of a tie game. With Odubel Herrera on the bench for the final innings, the Phillies went on to lose, 5-4, to the Detroit Tigers. Mackanin did not regret his decision to yank Herrera and his team-high .335 batting average from the game. “It’s important to me to set that tone,” Mackanin said. “When you don’t hustle, I’ve got a problem.” Herrera had singled in each of his first three at-bats. He drove in the Phillies’ first run with a hit in the third inning. But when he bounced back to the pitcher and took his time getting to first base in the seventh, Mackanin abruptly pulled him. Even Ryan Howard said something to Herrera in the dugout. “He didn’t run,” Mackanin said. “One of the ingredients to our success to this point is the fact that guys play with energy and they play hard. We’re training them to play the game the right way and not running is not the right way.” Herrera said he did not run because he was “frustrated” and “angry” with the at-bat. He said Tigers reliever Justin Wilson “got in his head” by varying his delivery times. Herrera even mentioned that Wilson quick-pitched him. “The pitcher was playing with me,” he said. “I have to learn from it. I didn’t think [Mackanin] was going to bench me, but I understand why. I can’t argue. I was frustrated. I respect the decision. I know that I did wrong. I have to learn from my mistakes and it won’t happen again.”

Ah, yes. The ol’ Philadelphia bring your lunchpail to work arguement that’s as old as time itself. Should your millionaire athletes be required to go balls out every second of every play for the city? Obdubel Herrera, who is inexplicably batting .335 which includes a 3/4 evening last night (which also featured a 14, I repeat, FOURTEEN pitch AB to lead off the game with a single), chopped one back to the pitcher and pulled a Jimmy Rollins instead of a Chase Utley.

I’m torn on this decision by Mackanin, who admitidly loves Herrera and has gone on record saying he thinks the young buck will win a batting title someday. Usually I’m all about putting players in their place for not hustling. What, you can’t bust your nuts down the line for 4 seconds, 4 times a game in the majors? Put me in the show for free and I’d touch the foul pole on every damn ground ball to the infield. However, in a one run game where the Phillies are kind of slumping, mayyyybbbeee Skip should’ve given him a verbal lashing instead of putting in David Lough, who promptly struck out in his only at bat. But Mackanin knows Obdubel more than anyone, and I trust his judgement here. He’s looking at the big picture of getting into Herrera’s head that this sort of behavior is unacceptable, especially when Herrera was starting to show a pattern.

Final Verdict: It had to be done.

Also, Ryan Howard should not be allowed to talk to Herrera when the OF gets more hits in one night than The Big Bum has in the month of May. This contract couldn’t bleed out any slower… 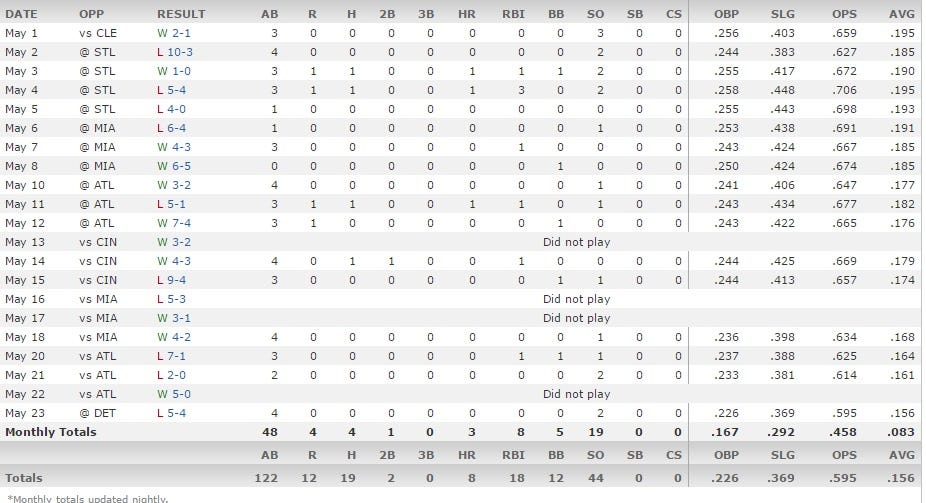