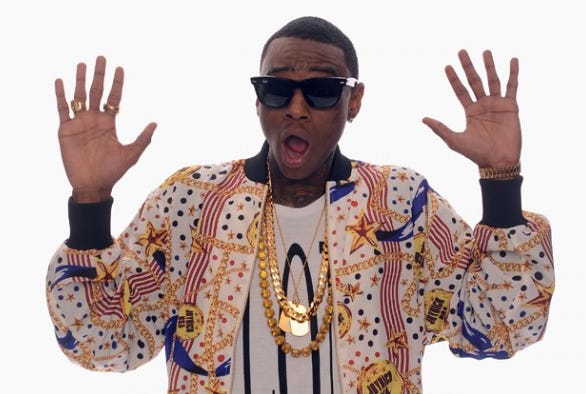 Matthew Bird, spokesperson and publicist for World Poker Fund Holdings commented, “The world of marketing is changing, today’s biggest influencers are not brands, but individuals who create content that drive loyalty and brand sentiment. We no longer are fed content from major news networks — we seek it out and consume it by individual influencers that enrich our lifestyles. Soulja Boy represents the best of the best and we are already seeing the impact from his presence.”

Soulja Boy, “I invest in things I understand. I enjoy music, and of course gaming. Being an influencer is a form of currency. Having portfolio diversification is critical if you want to be an effective brand ambassador. With regards to World Poker Fund, I believe in its strategy, its team, the vision, and management’s ability to target its financial goals.”

So the guy who wrote songs like “Gratata,” “Yahh,” and “Booty Meat” is now using terms like “portfolio diversification” and “brand ambassadors?” What a time, what a time! I get having an online reach of 15million people is kind of a big deal nowadays, with places like Twitter, Facebook, and other social media outlets quickly replacing billboards and print ads, but I just can’t wrap my head around a deal of this magnitude getting thrown at someone like Soulja Boy. When was the last time he put out a relevant song? ’07? ’08? They couldn’t find someone a little more relevant? Was Chamillionaire busy?

The question now is how will Soulja be spending all that cash? $80M’s a year is more than pretty much every pro-athlete in the world, leaving him with endless options of ways to spend it all. And though I normally don’t give out financial advice for free I’m willing to make an exception in this case.

A Pool Full of Jell-o - Everyone talks the talk when it comes to pools full of jell-o but I feel like Soulja Boy is the perfect person to finally walk the walk. It’s pretentious if someone like Mark Cuban does it, but if someone told you Soulja Boy has a pool full of jell-o there’s no way you question it. He has that in his favor, basically has to do it now.

Exotic animals – Nothing screams “filthy rich” quite like having a few panthers in your backyard. Maybe a peacock or two, they’re majestic as fuck. And of course, a koala.. for the ladies. Ladies love koalas.

The Entire Seinfeld Series On DVD – It’s a must have.

A Chik-fil-a That’s Only Open On Sundays - I’ve had this one in the holster for a while but I’ll give it up. Nothing screams “money-maker” more than a Sunday-exclusive Chik-fil-a. That’s cornering the market like none other. May take a few extra bucks at the start but the return will be tenfold.

Summer Homes in Nantucket - Because that’s just what moguls do.

The Jacksonville Jaguars - What are the Jags worth nowadays? $14? 15Mil? A mere drop in the pool.

Helen Owen – $400Mil might unlock the gates of heaven.

Ice - Considered the currency of the future by many. In a world threatened by global warming, nothing says “portfolio diversification” than investing in some quality frozen h2o. Maybe stretch the wallet and have it imported from somewhere exotic. With $80mil a year the world is your ice oyster.