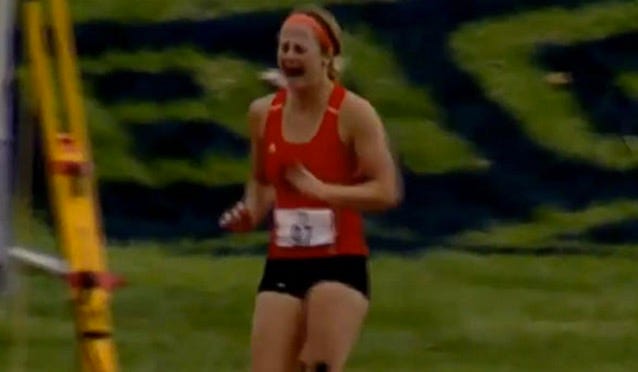 CBS – Idaho State senior Shelby Erdahl lined up for the 400-meter hurdle finals during Saturday’s Big Sky Outdoor Conference Championships with a chance to score points for her team in an individual event, something she had yet to do in her career.

“It was a longtime goal of mine to score for my team in the 400 hurdles,” she told CBS Sports. “And since I had made the finals all I needed to do was finish.”

The gun went off and Erdahl sailed over the first hurdle with ease. Then, while jumping off her left foot to clear the second hurdle — pop.

She crashed to the ground.

“After I fell, I got up and tried to run again but my foot wouldn’t work, and I knew I had most likely blown out my Achilles,” she said.

But rather than call for a medic or roll off the track, Erdahl stood up and began limping towards the finish line. Slowly but surely she strained to legally clear each hurdle to avoid disqualification.

The crowd continued to cheer her on, and she crossed the finish line with a time of two minutes, 53 seconds — she had finally scored a point for her team.

After the race it was confirmed Erdahl had suffered a ruptured left Achilles tendon. She had successful surgery on Wednesday.

“I never really thought of stopping,” she said. “To me that would have let myself, my team, and my coaches down.”

Women’s sports takes a lot of heat around here for being boring and bad overall but let’s be honest. This is impressive. Just flat out impressive. You ever rupture your Achilles? That ain’t “walk slowly to the locker room and eventually find out you tore your ACL” – that shit is impossibly painful, like can’t put any pressure on it painful. So nothing but respect for Shelby going beast mode and finishing the race just because her team needed the point and just because it was the goal she wanted to reach. Tougher than me, that’s for sure, and I’m the toughest guy I know.

Any time I hear anything about an Achilles all I can think about is that scene from Hostel.