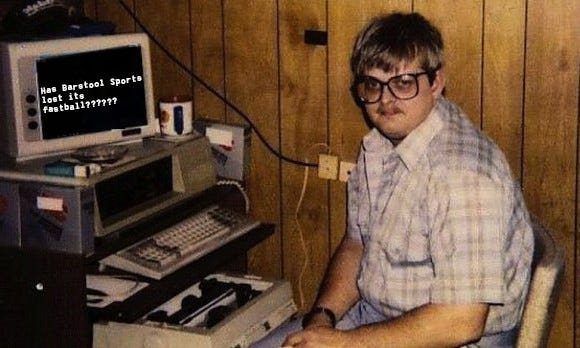 Welcome back to the weekly ombudsman column where we answer your questions about the insider politics and controversys surrounding the worlds weirdest sports blog. We’ve got a lot to dive into this week including censorship, viral tags, and Charlie Sheen, but before we start let me just remind you to send any questions, comments, and concerns to BarstoolOmbudsman@Gmail.com.

Now on to your questions:

Hello Ombudsman,
First off let me say that PMT is great you are really funny, on PMT. Your blogs however, well lets just call them a working progress.

Just wanted to weigh in on something someone had said a few weeks back about the f@g word. As a homosexual and avid stoolie I think it is offensive to gay people that f@g is one of only a few words not allowed in the comments. Is it really more offensive than cunt? Is being gay that bad.

The fact that you can say what ever you want in the comments except f@g and n!gg3r is offensive to gays and blacks.

Equal means EQUAL. If this is really a pirate ship that means you have to deal with foul mouthed pirates, and butt pirates alike, no discrimination.

Ken, first I am sorry for your loss, but I agree with your position that the most effect way to convey that you truly beleve that there is nothing offensive about those words is to send a email where you censor them all yourself.

This is a fair question since its now been over a year since anyone affilated with this website has been arrested while producing content. Not that the fastball is totally gone but Its like in Major League Two when Charlie Sheen is dating that babe who wants him to remake his image into the Mild Thing. Basically what I’m saying is this is the calm before the storm until Randy Quaid (you guys) shame us into posting some serously reckless shit that either gets us sued by Roger Goodell or arrested. If no one from the company either goes to jail or craps themselves while on the clock before the all-star break then yes, its time to start asking if we’ve lost our fastball or if we would lose to Alabama. Lets check in on the old meter: 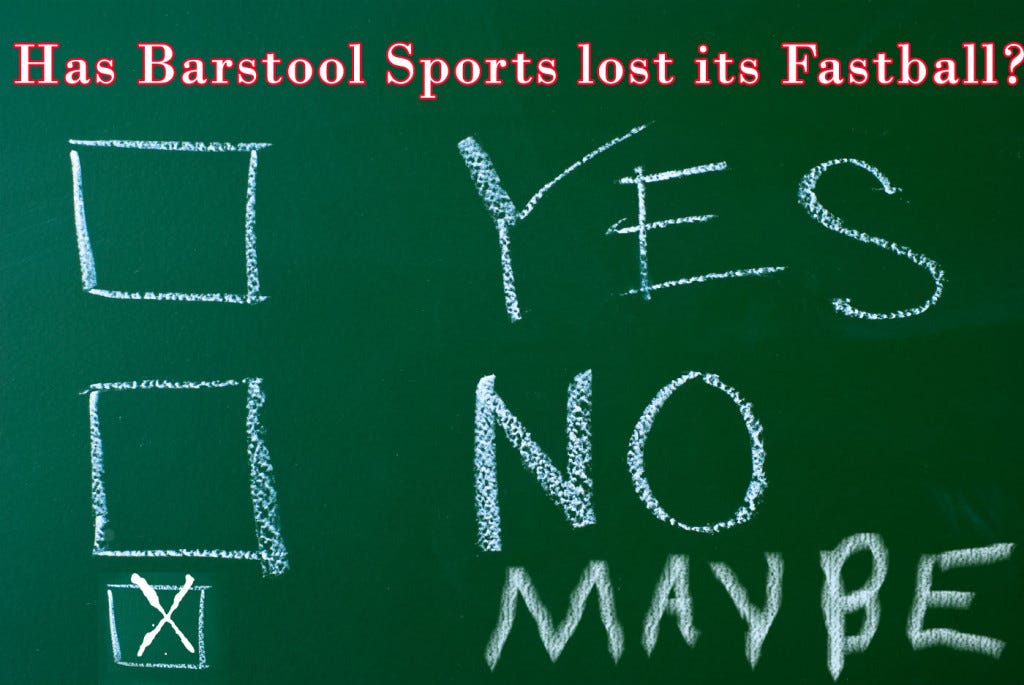 Believe it or not, Barstool actually keeps our office morale at a fairly tolerable level, despite only being able to read it on our phones while taking shits thanks to the firewall settings. Anyways, most of us in the office seem to agree that you guys have the perfect job. “Work” from wherever, don’t have to use spellcheck, no sexual harassment seminars, etc,. But the one thing we’ve all been dying to know, do you guys get laid from Barstool? Does introducing yourself to chicks as Whitesoxdave and Big Cat have the same prestige as doctors casually slipping in the “doctor” part before their name?

Speaking for myself I have gotten slapped more times then I’ve gotten laid by saying I work at Barstool. Judging by the way he talks about how bad he wants to go back on the road, I’m sure Hank was pulling in SEC tail with a rake on the Dixie tour. Daves married and no one wants to hear about the sex lives of married people. One anonymous employee tells me they “technically” get laid from the gig all the time because whenever they write a blog they have to scroll through all the ass pictures in the backend of the site so they get all horned up and JO, which is a type of sex, people forget.

Let me start by saying thank you for your service to the Stoolies. So much confusing shit has been going on for years thank god we finally have a voice of reason(?) to answer our questions. Now for mine…Why the hell do I keep seeing stuff posted under blogger name “viral” and why do they just post shit with no commentary? I keep seeing that name post stories that would normally be category 5 white-hot fire takes territory if picked up by anyone on the site (other than the GD baseball bloggers). Then nothing afterwards. Disappointing to say the least. Is this some kind of content-bot? Or something the Chernin people/DevNest Nate snuck into the app to data-mine us for the effectiveness of clickbait? I fall for it every time. Gonna need an explanation.

If you’ve ever read a science book you would know that only 10% of interpersonal communcation is verbal, so in theory, the wordless viral posts are just operating at a 90% more effecient level. Did you see the news about Wendy’s installing cashierlesss order kiosks? The viral tag appears to be the same type of thing. First step was Dave tried to outsource the blogging to California which is basically India except with more vegetarians, and now he’s sucking up to the machines by automating so they’ll kill him last during a eventual takeover.