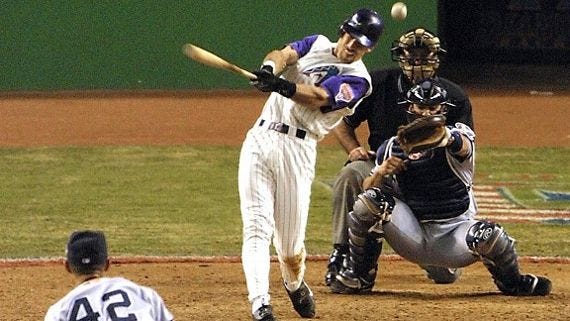 Nathan Eovaldi wasn’t among the players mentioned by name by the team’s managing general partner Wednesday, but the righthander did his part to pick up the rest of the team, leading the Yankees to a 4-2 win to salvage the final game of the three-game set at Chase Field.

Eovaldi combined with Dellin Betances, Andrew Miller and Aroldis Chapman for a two-hitter to help the Yankees avoid a three-game losing streak.

Earlier in the day, Steinbrenner made his first public comments about the Yankees’ dreadful start, putting the onus on the players to get the job done while giving a vote of confidence to Joe Girardi and his coaching staff.

“I think the coaches are doing a good job,” Steinbrenner said. “These are professional athletes. They’re the best baseball players in the world. Sooner or later, it comes down to them, on the inside, to push through, whatever it is they’re going through and to persevere.”

This last series certainly did not go as planned. We started off a west coast road trip with a spot start from a AAA guy, and you don’t need a baseball expert to tell you that that’s not ideal. Things spiraled out of control in that game which led to Coke getting DFA and others getting demoted back to the minors. It’s tough to rebound from that against Greinke the next day so pretty quickly we lost that series.

Finding motivation for major league players is the toughest thing in the world but that’s the biggest problem this team has. For the most part we have established guys with big contracts that will carry them to or close to the end of their careers so lighting a fire under them when things aren’t going well is tough. Luckily Hal stepped up to criticize the team and put the blame on the players just in time to save the last game of the series. Eovaldi looked great and he was able to hand the game over to No Runs DMC to lock up the win and save face.

Now we head to Oakland who is a bad team. They’ve played and won 2 more games than the Yankees but on paper and in the real world, they stink. If you look at the matchups for the first 3 games of this series you’ll see that our starters are not only in a position to win, but they should win. Being 5-12 on the road needs to turn around and if you’re going to turn that around, you need to do it now. In a shocking turn of events Oakland came to New York and swept us early in the year so it’s time to extract revenge against a team that’s won 4 in a row.

Nova kicks things off tonight on Oakland where he holds a career era of 3.29. He did have a scoreless inning series earlier this year but with the offense now scoring some runs he will need to keep that momentum going. We’ll see if Girardi’s decision to pull Eovaldi on 85 pitches to go with DMC will carry over a day but if Nova can be strong and go deep in this game we wont have to talk about it tomorrow.