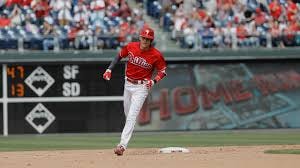 [Editor’s Note: Are the Phillies good? That remains to be seen. Personally I think they’re gonna fall back to Earth and even .500 would be a stretch at the end of the season. But to say they’re not at least surprising at this stage is outrageous, egregious, and preposterous. So suck a fat one, Carrabis.]

Yesterday afternoon, the 24-17 Phillies beat the Miami Marlins by a score of 3-1. That marks their 4th straight series win, 7 out of their last 8 and 9th overall this season. For comparison’s sake they were only able to win a total of 14 series’ last season. They didn’t win their 24th game until June 21st.

Now I read an interesting blog yesterday about run differential and how the Phillies can’t possibly keep up this pace and blah blah blah. Well my friends, I can’t deny the fact of how important run differential is. You won’t find a team on record with a negative run differential in the regular season that went on to win the World Series. In fact, you will barely find any teams that have made the playoffs because of that hitch outside of the 2007 Diamondbacks.

Baseball is a game of being in the right spot at the right time. Stats like run differential is one of those things that come playoff time, is absolutely meaningless. The goal for the 2016 Phillies is to play winning baseball and to learn how to win as a team, despite how some of the statistics may not be in their favor. That is all I am asking of them and really that’s all the town is asking of them at this point in time. As cliche as it sounds, it’s true. Ignore the haters and all of us stat nerds and keep striking out Giancarlo 9 times in 10 plate appearances because that’s the kind of stuff that win’s baseball games. Now cue the damn highlights.