TIME — Canadian Prime Minister Justin Trudeau apologized Wednesday for elbowing a member of Parliament while a physical political maneuver played out on the floor of the House of Commons.

As votes in the House cannot begin until all party whips are seated, Trudeau tried to physically pull the Conservative Whip Gord Brown from the group of New Democrats who were blocking him from his chair. During the process, he elbowed opposition member Ruth Ellen Brosseau, which caused immediate uproar and confusion, the Washington Postreports.

“I noticed that the member, the Opposite member whip, was being impeded in his progress,” Trudeau said later to the chamber. “I took it upon myself to go and assist him forward, which was I now see unadvisable as a course of action, and resulted in physical contact in this house that we can all accept was unacceptable and I apologize for that unreservedly.”

Fucking Canada. Just so ingrained to be nice and as non-confrontational as possible. How are they freaking out about this? This “elbow” threw the entire country into turmoil? Are you shitting me?

SOFT! This happens literally 2,000 times per day if you take the subway. How have politics become so soft? Sometimes you just have to miss the olden days. In 1804 our sitting Vice President, Aaron Burr, literally shot Alexander Hamilton to death in a duel. In 1856 Massachusetts anti-slavery Senator Charles Sumner was caned into unconsciousness in the Senate Chamber by South Carolina Representative Preston Brooks (the North won the Civil War 9 years later, so fuck him).

And here we are in Canada and this female MP had to leave the chamber because of that inadvertent light graze?

(I know… DEFINITELY would)

Look, you can’t leave the room. Just can’t do it. Can’t let ‘em see you hurt. It’s politics.. you HAVE to be able to take a punch and get right back out there. Instead, this chick leaves the room, misses the vote, then gives a speech about how overwhelmed she was? Is this an AA meeting now?

Trudeau is being called a bully and had to say “sowrry” to everyone. They’re also alluding to his background in boxing and bouncing, as if accidentally bumping into someone could only be explained by years of violent training.

We’ve all been Trudeau’s enablers: the boxing pics, the yoga pose, the pushups. All that oohing & aahing over his virility went to his head.

This whole thing reassures me that Canada isn’t a threat. In any way. Definitely need to build a wall to keep all the rapey Mexicans out but don’t worry about Canada. They’re soft. 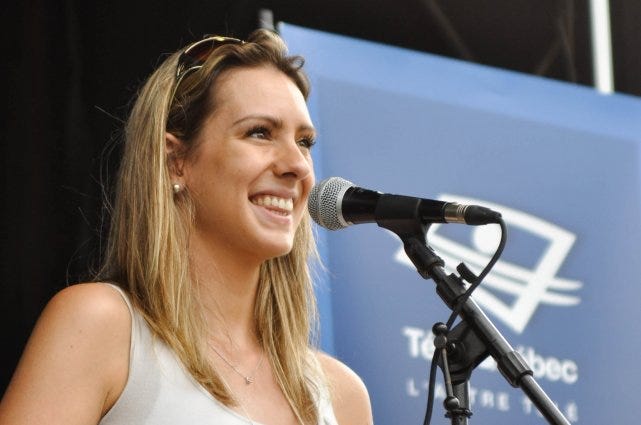