The maniacs in this video have a love for fighting sooo deeply rooted in their DNA unlike anything I have ever seen. Just a powder keg ready to explode. It’s like the people that bring a glove to a baseball game and play catch for an hour before going into the stadium, but on steroids. Ball is life for some. Fighting is life for others. Each person in that ring can probably recite all of Bloodsport and reenact the scene when Van Damme gets the powder in his eyes verbatim.

But my favorite part of the video was all the old wrestling staples coming out. A manager of some sort rushing the ring, tables and chairs being #weaponized, and this guy going with a mini Hacksaw Jim Duggan 2×4. 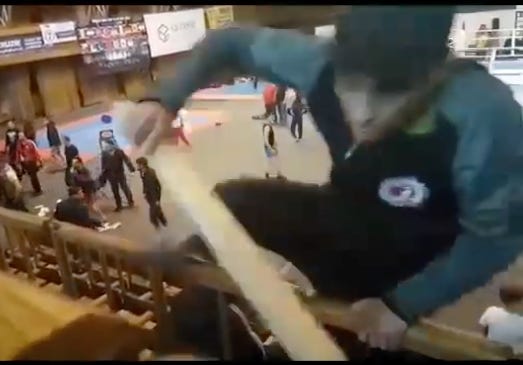 Oh yeah, and one of the actual kung fu fighters being handed a Singapore cane and cracking motherfuckers in the head like The Sandman. All that was missing was the big star of the company to come in and clear the ring as his entrance music blared from the speakers as fireworks shot off. Damn the WWF was awesome back in the day.