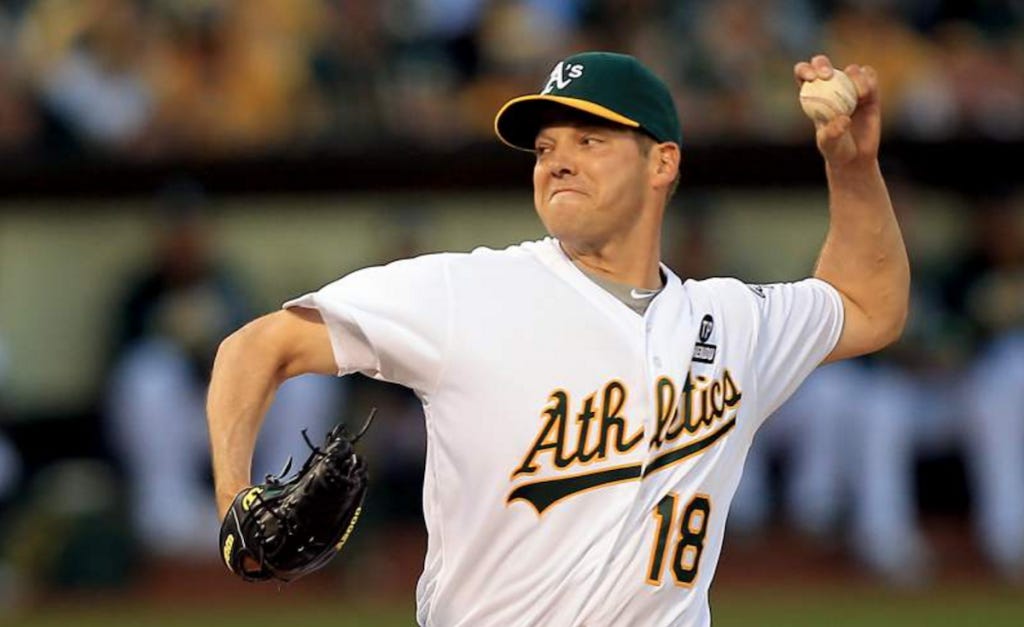 (Note: This is in no particular order.)

Rich Hill — The pride of Milton, Massachusetts, Rich Hill is having one of the most overlooked seasons of the year for a couple of reasons. For one, the A’s jumped on signing him almost right away. It was so early in the offseason that hot stove watchers probably forgot he was even a free agent. Hill was working out with his old Legion team before he signed with the Red Sox last summer, and made four starts with a 1.55 ERA, and struck out 10 batters in each of his first three starts. It was a nice story, and I thought he deserved a major league contract, but at the age of 36, it wouldn’t have surprised me if he didn’t. Well, the A’s took a chance on him on a one-year deal worth $6 million. Hill has made 8 starts for Oakland, and has the sixth best ERA in the American League (2.58).

David Price — The Red Sox spent $217 million on David Price to finally bring a true ace to Boston, or so they thought. Sure, Price is still regarded as an ace because of the pitcher that he has been throughout his career, but he has yet to consistently show Red Sox fans why he got that monster contract. Price has allowed the second most earned runs in the American League (32), and has the third highest ERA (6.00).

The Chicago Cubs — Everybody knew that the Cubs would be good this year, but I don’t think anybody thought they’d be “holy shit” good. The Cubs came into Wednesday with a +107 run differential, which is just absolutely absurd. They’ve scored the second most runs in the majors, and the most runs in the National League (216), all while having the lowest team ERA in the majors (2.69). They’re an unstoppable force, and their 27-10 record proves that. The team with the next best run differential in the majors is the Red Sox at +55. It’s really the Cubs and everybody else this year.

Zack Greinke — Next to David Price, Zack Greinke was the biggest splash of the offseason when he signed the most lucrative contract for a pitcher in baseball history by average annual value. He has also been a tremendous disappointment. After posting the lowest ERA (1.66) and the lowest WHIP (0.844) in the majors last year, Greinke has a 5.08 ERA and has allowed the most hits in the MLB (67) in nine starts for the Diamondbacks in 2016. Opponents are hitting .294 against Greinke, which is the sixth highest batting average against in the National League.

The Baltimore Orioles — I picked the Orioles to finish in last place in the American League East. I thought that their starting pitching stunk, and that they wouldn’t be able to hang as a result of that. I was wrong, kind of. Orioles starters have an ERA of 4.39 coming into Wednesday, which isn’t great, but it’s been good enough, thanks to having the best bullpen in the American League and the second best bullpen in baseball with an ERA of 2.53. As a team, the O’s are slugging .455, which is the second best mark in the American League, and fourth best in the MLB, which is no surprise. We knew they’d hit, and we knew they’d hit for power. But they’ve greatly benefited from having a hitter friendly ballpark at Camden Yards, going 16-7 at home so far this year, which is the best home record in the MLB.

Sonny Gray — The ace of the Oakland A’s staff, Sonny Gray, has been far from an ace in 2016. Gray is in his fourth major league season, and came into this year with a 2.88 ERA and 419 strikeouts in 491 innings. This year has been on the complete opposite end of the spectrum for the 26-year-old, who has allowed the fifth most earned runs by a qualified American League starter (29). Gray also sports the fifth worst ERA in the AL (5.84), the fifth highest opponents’ OPS (.851), and has allowed the fifth most total bases (89).

The Seattle Mariners — There were some baseball experts who picked the Mariners to win the American League West this year, so if you believed them, then their season to this point has not come as that big of a surprise. However, they were also a popular pick to win the division last year, yet they finished 10 games under .500 and 12 games back of first place. A lot of things had to go right for the Mariners to enter Wednesday alone in first place, and most of them have gone right. As a team, the Mariners have the fifth best ERA in baseball (3.28), with the fifth best bullpen, and sixth best rotation by ERA. They’ve also scored the third most runs in the American League (175), so you could argue that they’ve been the most well-rounded team in the American League next to the Chicago White Sox.

Dallas Keuchel — Winning a Cy Young award usually brings a lot of expectations for the future, and those expectations have not been met in 2016 for reigning American League Cy Young award-winner, Dallas Keuchel. After leading the American League in innings, ERA+ (160), and WHIP (1.017) in 2015, Keuchel has fallen off a cliff in his follow-up season. Keuchel is tied with Adam Wainwright, who could also be on this list, for the second most earned runs allowed in all of baseball (34). The 34 earned runs allowed by Keuchel are the most allowed by any starter in the American League, as are the 64 hits that he’s allowed.

David Ortiz — When David Ortiz hits for power, it doesn’t surprise anybody. When David Ortiz leads the majors in OPS when he’s 40 years old and retiring at the end of the year, then yeah, I don’t think anybody expected that to happen. Entering play on Wednesday, Ortiz was hitting .311 with a 1.069 OPS. Ortiz’s OPS leads the majors, as does his slugging percentage (.676). The veteran slugger is on pace to hit 41 home runs and drive in 138 runs. He’s 40.

Jose Quintana — If you’re a White Sox fan, then you already know that Jose Quintana is a really good pitcher. He’s been highly underrated since 2013, and has lived in Chris Sale’s shadow for three years. Over the last three seasons coming into 2016, Quintana has averaged 202 innings with an ERA of 3.40 and 519 strikeouts in 606.2 innings. This year, though, it appears he’s turned things up a notch, because he leads the American League in ERA (1.54), and is second to only Jake Arrieta for the lowest ERA in the game.

The Philadelphia Phillies — Everyone is complaining that I don’t have the Philadelphia Phillies on here. The Phillies won again today to improve to 24-17, and moved into a first place tie with the Washington Nationals. Is their record a surprise? Yes. Is the fact that they’re tied for first place a surprise? Yes. Do I think that this is going to continue? No. They’re tied for first place, yet they have the fourth best run differential in the NL East (-28), and that’s why I originally left them off the list. They actually have the fourth worst run differential in the whole National League. They’re not as good as their record indicates, and you’ll see that as the season plays out.