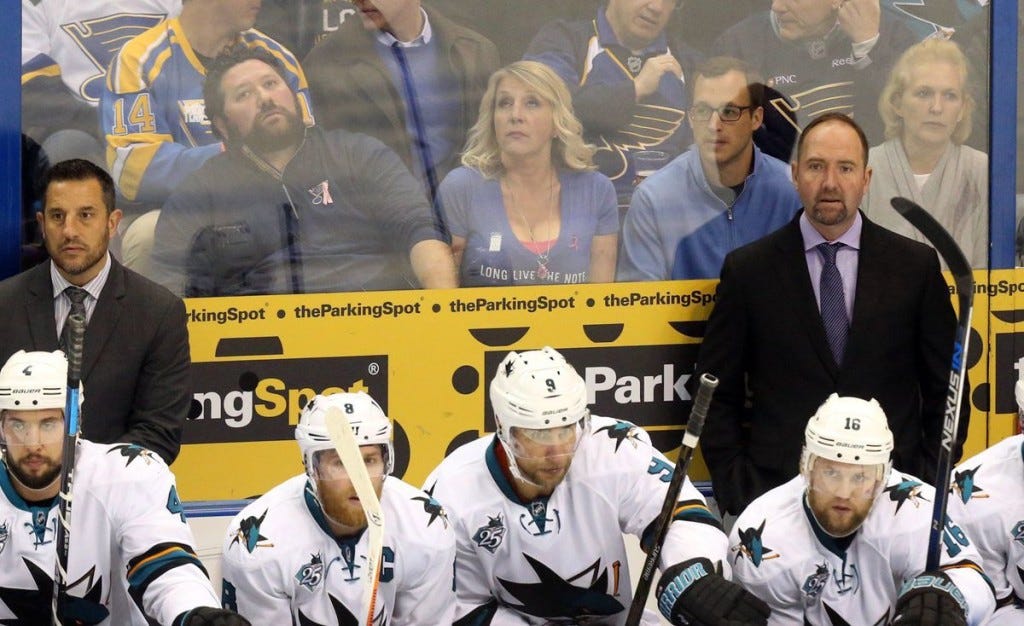 STL Today – It’s long been Blues or bust for Emily Rothschild. But it wasn’t until the Stanley Cup playoffs that her anatomy became a symbol of a hockey fandom’s inspiration.  The St. Louis native’s bosom first appeared in the national spotlight during the series against the Dallas Stars when she was seated behind the opposing coach. It reappeared in a V-neck “Long Live the Note” shirt during Game 1 against the San Jose Sharks. Of course, Twitter took notice…

So in case you forgot, the St. Louis Blues have this old hockey trick they’ve been breaking out lately where they throw a giant set of cans right behind the opposing team’s bench. When you’re playing playoff hockey and every game is so crucial, sometimes you need to find a way to take any and every advantage you can get. For most of the world, these knockers were merely just another set of melons. But for others, those boobies belong to an actual person and a damn fine fan at that. A fan who has seen her team constantly come up short in the playoffs year after year and is willing to do whatever it takes to help her boys finally string together a successful postseason. Even if that means rocking a massive V-neck in an ice rink which, you know, is filled with ice and not exactly the warmest environment in the world. Now I guess as you could imagine, getting used to the entire world staring at your twins isn’t going to come easy right away.

…Rothschild took to social media today to set the record straight. “While at first it seemed innocent, a number of people around St. Louis and the country have decided to objectify Emily. We have decided as a family to make lemons into lemonade,” she posted on her Facebook page. “I felt kind of belittled and degraded as a female,” she said. “I was there to cheer my team on, not to be seen.”  …

Personally, I like to think I’d be pretty hyped with the idea of people crediting my bulge to an NHL team winning a Stanley Cup Playoff game. Feel like this would fall into the category of “no press is bad press”,  but I guess I can see where it would be different with a chick getting her titties thrusted into the spotlight like that. But like Rothschild said, she’s trying to make melons into melonade here.

… The family has taken to the spirit of lemonade. They reached out to Susan G. Komen Missouri, a local, independent, nonprofit organization whose mission is to save lives and end breast cancer. “If you’re going to make it about my cleavage, I’m going to make it about raising money to save the cleavage,” she said.  The family created Team#RallyBoobs for the Susan G. Komen Greater St. Louis Race for the Cure on June 11. They are encouraging other fans to join their team and help raise money for a greater cause. ?

So now thanks to Emily Rothschild, we’ve got ourselves one hell of a win-win scenario on our hands here. Because not only will her tatties hopefully inspire more avid hockey fans to join the #RallyBoobs movement, but now we’re also kicking cancer’s ass at the same time. And for all of those dweebs at Sports Illustrated who feel the need to be all high and mighty when it comes to these types of things, just let this all sink in for a moment. Because if it weren’t for people on the internet “objectifying” this lady’s rack, then Team #RallyBoobs never comes into existence and the fight against cancer loses one of it’s newest soldiers. Just saying.