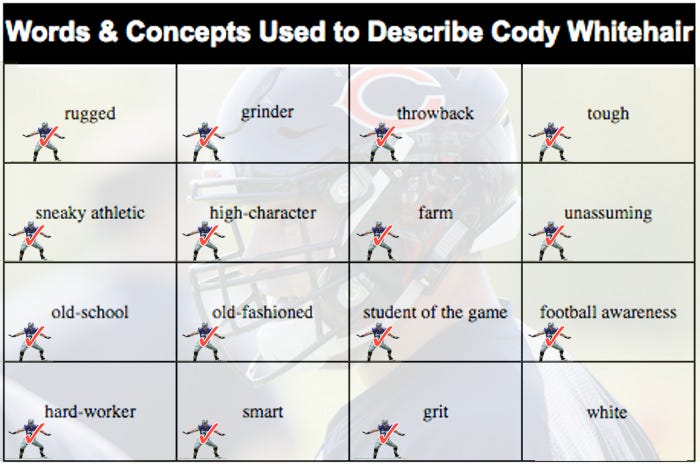 Its no secret that I am a fan of grit. But I’m talking about real grit. Not the kind that has become so ubiqitous on the front pages of CNN and NPR podcasts over the past two years. That’s the pussfication of grit. Modern science has turned grit into a four-letter word when in realty being gritty is a lifetime sentence you take from cradle to grave. You can’t learn “grit” any more than you can teach being a sociopath.

That said, the recent Chicago Tribune profile of former Kansas State Lineman and Chicago Bears 2nd round draft pick Cody Whitehair is doing its best to Make America Grit Again. Its the online equivilant of a Pure Prairie League Song being covered by Pat Boone. Its basically the first four notes of Sweet Home Alabama stretched out into 12 paragraphs. If I could have a Batman Signal built for myself it would look like this headline:

Already I’m thinking this guy might be made in a lab by mixing Danny Woodheads seed and JJ Watts nose-bleed like the cover of “Load” by Metallica. And how many sentences does it take for the first appearance of the word “grit?” If you said just one, you’d be correct:

Scan through the highlight cut-ups of Cody Whitehair‘s career at Kansas State, and they’re about what you would expect from a gritty offensive lineman who grew up on a farm in Abilene, Kan.

So besides his old-school work ethic and his farm grit, how else would you describe Whitehair? Would you be ok with your daughter bringing him home to her parents?

So when Bears coach John Fox kept peppering general manager Ryan Pace this offseason with requests to stock the roster with “throwback players,” he may as well have been describing Whitehair specifically. Smart. Tough. Driven to work his tail off.

“Smart. Tough. Driven to work” is like the fake grand finale halfway through this fireworks display of unassuming gumption.  Plus, tossing in the word tail at the end implies that Whitehead is so gritty that he could be compared to an animal that he himself would enjoy either hunting, or use to assist him in hunting. But like a snowball traveling downhill, or possibly a ball of bailing wire, this thing just keeps picking up steam:

“We drafted a very high-character guy who has played a lot of football,” Loggains said. “He’s tough. He’s the type of player Coach Fox wants. When you talk about a throwback, old-school guy, that’s Cody.”

Cody’s the type guy you could allmost imagine working as a correctional officer, or playing bass guitar in a Bon Jovi cover band. Understated but effective genital system type guy. This is all well and good but can we toss something in to let us know that he’s not all nails and sand, maybe something along the lines of him being deceptiveley good at sports?

His athleticism is admirable, too

There we go. Lets not get too flashy though, does he have any other Jordy Nelson-esque qualities?

Still, Whitehair remains a head-down grinder, wired that way since he was a young boy working long hours on his family’s farm.

“I threw a lot of hay bales,” he said. “When I was in high school, I was always out there at 6 in the morning until (late). If we had a truck driver coming in at 11 o’clock at night, I had to be that guy to help out.

Working on a farm is awesome and I truly mean that. If it wasnt for farms we wouldn’t have anything to put in our lunch-pails plus there wouldn’t be farmers daughters.

If there’s another quality Whitehair exhibits that should catalyze his development, it’s his sharp football awareness

Ok so he’s got football savvy plus football awareness. Seems like a truly, truly, outstanding young man not like some of these other player’s you see out there these days. But the NFL is a teacher appreciation league and I want a guy who cares as much about letter grading as he does about road grading.

“Plus he was always very bright in the classroom.”

General impression from reading this artcle is that Cody Whitehair seems like the kinda guy’s guy you’d like to sit down, have a beer with, and maybe ask to co-sign on a loan with ya. And now that John Kuhn has obediently followed Ted Thompson behind the barn Old Yeller-style, and the Bears have found their own Jordy Nelson, Chicago just pulled even with the Packers in my NFC North Labormetrics last one out, first one index. Gonna be fun to watch.