Mike Milbury set the hockey twitter world on fire last night with this somewhat facetious quote when talking about the St. Louis Bues only being 50% scumbags in the 2nd period and not going full-blown Ogie Ogilthorpe out there. He immediately followed it up with “I don’t mean that, obviously, too seriously” but that wasn’t going to stop everybody from getting MAD ONLINE about Milbury saying Milbury shit. Because if there’s one thing in the world that Mike Milbury is better at than anybody else (besides beating someone over the head with their own shoe), it’s pissing off the entire hockey universe every time he opens up his speak hole. By all means, hockey fans shouldn’t even care at this point what Mike Milbury says because as far as quotes from him go, this is pretty par for the course. But he’s such a hateable little cunt that you can’t resist the urge to lose your shit every time he says something like this. Which got me to wondering, is Mike Milbury THE most hateable human in all of hockey? Let’s take a quick look at his competition. (Disclaimer: We’re only talking people who are still currently relevant) 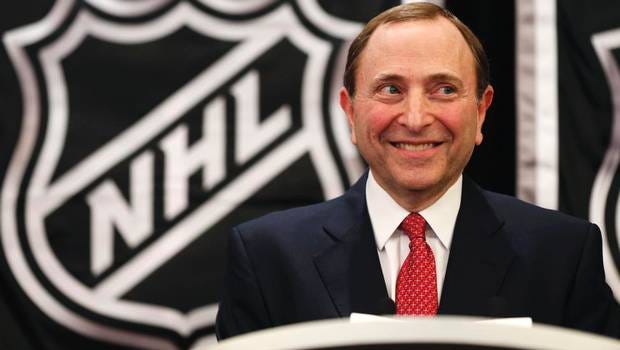 Here’s my thing with Gary Bettman. Sure, there have been a few work stoppages with him at the helm of the league. Sure, he had that blunder with the entire John Scott saga this past year. But does anybody truly hate Gary Bettman? Because for me, it seems like people enjoy booing Gary Bettman more than they actually dislike the guy. There’s no denying how much the game has grown since he’s been commissioner and I feel like if he wasn’t so goddamn creepy looking, he’d actually have the majority of fans won over. Again, the lockouts have sucked and everything but for the most part, Gary Bettman is indeed not more hateable than Mike Milbury.

The thing that really separates Corey Perry from other dirtballs in the league like Tom Wilson and Zac Rinaldo is that Corey Perry is actually really fucking good. He’s by far and away the best player in the NHL who also happens to be a total fucking scumbag. He looks like a naked mole rat, he pulls shit like this on 18-year-old kids who haven’t even been drafted into the NHL yet, and somehow he’s still a guy who will win the Rocket Richard and Hart trophies. Couple in the fact that he plays with Getzlaf and Kevin Bieksa and you’ll have enough hate coursing through your veins to power an entire city. Final Verdict: Equally as hateable as Mike Milbury

Tim Peel is the NHL’s answer to Joey Crawford. The man is just brutal at his job, always finding a way to make the game about himself, always finding a way to get in the fucking way every night, always finding a way to make the worst calls imaginable and you just know you’re in for a rough night whenever you see he’s on the officiating crew for your team’s game. This is definitely a sleeper pick but I feel like you won’t find a single person in the world who has anything nice to say about Tim Peel. People either A) hate his guts or B) don’t care about him one way or the other. Final Verdict: Not quite as hateable as Mike Milbury but definitely pretty dang close.

I wrote a blog two weeks ago about how we, as human beings, need to start embracing Pierre McGuire for all of his weirdness. Yeah, he may offer a little too much insight to the broadcast but he still brings plenty to the table every night and cracks me up. So everybody knows how I feel about Pierre yet there’s an entire contingency of hockey people who feel the need to hate the ever living shit out of the guy. The only problem I see with that hate is that I feel those people hate Pierre McGuire because they feel they HAVE to hate Pierre McGuire. As if it’s the only way that they’ll be accepted by their Hockey Twitter peers is to bash everything he says. So sure, he’s hated by plenty but I don’t think it’s a deep-seated hatred. Final Verdict: People would save Pierre in a house fire before they would save Mike Milbury.

Very rarely do you find a player who is despised by all other 29 fan bases but Tom Wilson is that guy. Unless you’re a “die-hard” Caps fan (as if those actually exist), you have no idea how the fuck this guy was a 1st round pick and what he brings to the table other than being a sack of shit. The only problem with Tom Wilson, as I mentioned above when talking about Corey Perry, is that he sucks. I think that I hate Tom Wilson more than any human on Earth should hate another person. But even I find hating Tom Wilson to grow tiresome after a while because he simply isn’t worth the time or energy. 231 career games played, 14 career goals, 486 career penalty minutes. It’s clear that he’s just a goon with a decent head of hair. However, he does have the same effect as Mike Milbury in the sense that he drives the hockey world fucking bananas after every one of his questionable hits and even more so when the DoPS decides not to suspend him for them. Final Verdict: Equally as hataeable as Mike Milbury but maybe a little less depending on the day.

– Sidney Crosby but I feel like the amount of Crosby hate has subdued over the years. Yeah, he’s a little whiny cunt but he’s definitely not as polarizing today as he was let’s say 3-4 years ago.

– James Neal is a bag of dicks but kind of similar to Crosby, I don’t think people care about him enough any more to hate him as much as they hate Milbury.

– PK Subban but only if you’re a racist.

– Alex Burrows is actually human garbage and makes me sick to even think about so we’ll just leave this to one sentence. Actually, the Canucks in general are all pretty damn hateable. Fuck those guys.

I’m sure that I missed plenty of people that you guys hate but I think I got all the big ones out of the way. Feel free to keep the conversation going on Twitter @BarstoolJordie and let the hate flow through you.