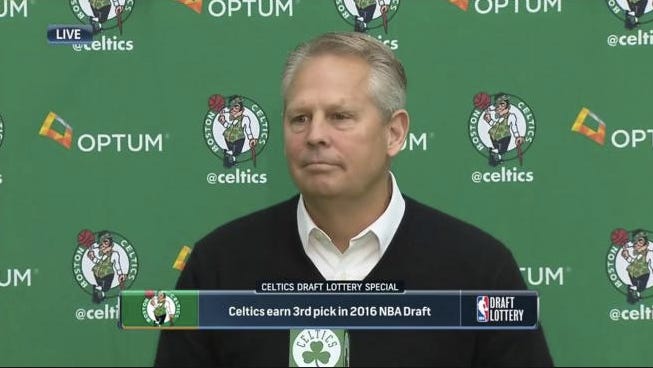 Does that man look happy? I feel you Danny, I feel you. Now it would appear there are some that feel my response last night to learning the Celts would be picking third was an overreaction. That they are still in great position. Allow me to explain my frustration and sadness with this result.

Obviously picking third is a better outcome than what many expected (4-6). I’m not debating that. But what I have a problem with is that people think it doesn’t hurt the Celtics being third, as opposed to the top two. Here’s why it does. Any original potential trade ideas you had for a Boogie Cousins or Jimmy Butler or Paul George, no longer is a possibility. The pick is too low. That now means you are either adding in more players to a deal, or have to offer more picks and a better player to make that same sort of trade. At that point you are giving up so many assets to get a piece like Butler, your list of options become limited. We heard all season long how Celtics fans over value their own players, and now all the sudden those same players plus the third pick is going to equal a star? Is Isaiah + Butler and not much else enough to bring in that huge third piece? Probably not IMO. Danny Ainge himself last night even said “Trading the 3rd pick will be difficult, sure”, so I’m not sure why there was such outrage over my response. And let’s not forget, you don’t think the Lakers are going to be going after some of the same big name players the Celtics are? So there is a strong possibility that you are competing for the same player with a lesser trade asset. That sucks.

I know what the percentages said, and it’s because of those numbers that as a Celtics fan we should be happy with this result. Well, once they made the top 3, that all changed. When was the last time the top of the lottery went all chalk? And of all the years, this is the year it happens? That’s a kick to the dick no matter how you try and spin it.

So let’s pretend they keep the pick, this is the other reason why picking third sort of sucks. Looking at the Celtics most pressing needs, it’s clearly shooting and a low post presence. Well, the Celtics now are the first team that will truly have to make a tough decision in this draft. Are you comfortable with hoping Bender turns into the next Godzingis?

I’m not there yet. For one, Porzingis actually did shit in a tough European league. As we move down the list you think OK, how about Jaylen Brown. Well, he shot 43% (29% from deep) in college. Can this team afford to waste a high pick on another guy who can’t shoot, when this team desperately needs shooting? Which means do they turn to Jamal Murray, a promising 6’5 guard who is a better shooter than Brown, but is just 19. How did the last 19 year old from Kentucky turn out (RIP James)? Next up is someone like Buddy Hield. As a player I love him, he’s 6’4, and has developed into a legit shooter, so he would appear to be a good fit. But is he a bit of a reach at 3? He isn’t quite the athlete the other two are, so as you can see they are sort of stuck.

I’ve also seen it thrown around that hey, the Celtics are a 48 win team and are adding a top 3 pick, how can that be bad? Well to some degree that’s true, but when the owner is on record saying he prefers to trade the pick, and your biggest asset’s value took a bit of a hit, that doesn’t frustrate you? What this means for the offseason is anybody’s guess, but whether you want to believe it or not, this result potentially throws a wrench into the rebuild.

I agree things could have been much, much worse, but if you’re under the impression the Celtics are in just as good as position picking three as they would be at one or two, you aren’t really paying attention.

Let’s hope Danny has some tricks up his sleeve.