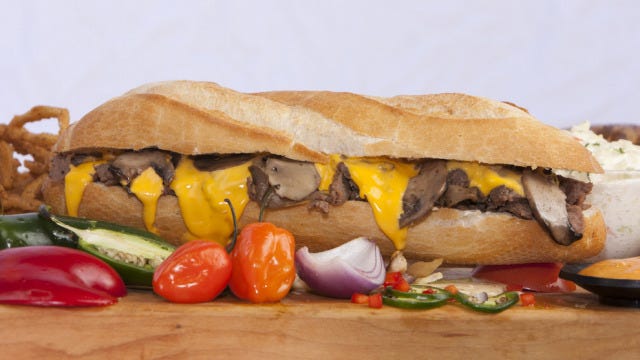 PITTSBURGH (KDKA) – Move over Philadelphia, the best cheesesteak in Pennsylvania is right here in Pittsburgh. Groove Cheesesteak Company, the former Southside Steaks, has been voted best cheesesteak according to USA Today vote. We can imagine the major upset isn’t going to sit well with Philly residents. The 10 Best website says the vote actually came down to a matter of a few votes between Groove and Dalessandro’s Steaks & Hoagies. Don’t worry Philly, 7 out of the top 10 best cheesesteaks came from the City of Brotherly love.

BLASPHEMY. Look at that shit. That looks more like a roast beef sandwich than a cheesesteak. Now I’m not saying Hope Solo on a roll isn’t good. I’m sure it’s delicious, but I prefer to guess what kind of animal my cheesesteak meat is coming from. I don’t care if every Yinzer west of Penn State were the only people to vote in this thing, stick to what you’re best at. Philly doesn’t invade in on Pitt’s pierogie and subtle racism territories. We’ve already are taking enough blows to the dick with our shitty sports efforts and Mario Kart World Champions losing to Massholes for ass tats. Take your 6 Super Bowls, hockey team that’s still playing, and playoff baseball team and shove it. Let us at least have our cheesesteaks because, dammit, we don’t have much.

Smitty’s UPDATED Official Philly Cheesesteak Power Rankings (FUCK Barclay Prime and their $100 cheesesteak, for I have too much pride and too little money to eat):