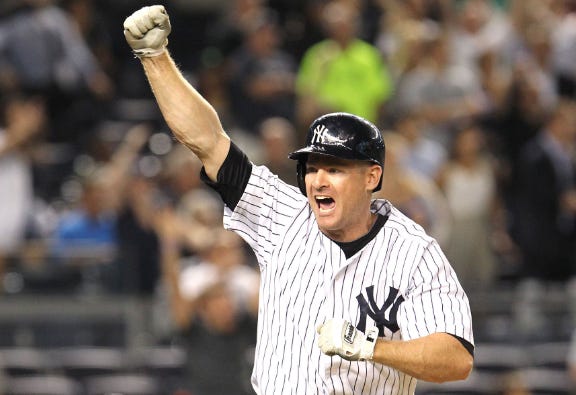 NYT- Sixty-seven at-bats over the course of 10 seasons hardly make Yankees third baseman Chase Headley a prolific pinch-hitter, but in that time he has learned a thing or two about the art of being a successful substitute.

“You don’t want to wait around,” Headley said. “The one thing that any great pinch-hitter I’ve ever talked to has told me is that you better be ready to hit the moment you step into that box.”

So after languishing on the bench for five innings, and stretching and hitting in the cage for two more, Headley jumped on the first pitch he got from White Sox reliever Matt Albers in the seventh inning on Sunday afternoon at Yankee Stadium, pummeling a thigh-high sinker into the gap in right-center field to score the go-ahead run in a 7-5 win over Chicago.

It was significant for Headley — who had recently gone 23 straight games without driving in a run — and the team, which polished off a third consecutive series win to finish a 7-3 homestand. Headley’s heroics helped reliever Dellin Betances shake off his first blown save, and allowed Carlos Beltran to smile in the clubhouse over a milestone homer.

In the sixth, Beltran hit the 400th home run of his career, joining Mickey Mantle, Eddie Murray and Chipper Jones as switch-hitters who have reached that mark.

What a difference a week makes for The Yankees. After a 7-3 homestand the season went from being basically over, to being back in this with Chase Headley being one of the hottest players in the league. I’ve said since the beginning of the season, that eventually these guys would balance out the bad and start to hit like the back of their trading cards. Now everyone hasn’t fully done that yet, because we still have a bunch of guys hovering around the Mendoza line, but the improvement can be seen everyday.

A big area that we’ve seen improvements out of are Hicks and Headley. Headley is under contract for a few more years and Kicks is getting more playing time than he ever has in the past, so seeing them get going was and is a key to turning this season around. Over the last 7 games these guys are both hitting around .350 and have combined to 3 home runs and drive in 10 runners. When you can get that kind of production from the back end of your order, you’ll win ball games. It seems like Chase is seeing the ball better because he’s cut down swinging at bad pitches to work walks and carry a .435 OBP during the same time period.

The other big development we saw out of this weekend is the debut of “No Runs DMC”. Dellin, Miller and Chapman we’re teased to us on Thursday night, before we blew the game open, but were officially debuted in succession on Saturday. The biggest thing detractors said was “Chapman can’t win if you don’t have the lead” and I don’t think guys weren’t playing for Miller, but just knowing the firepower that’s out in the bullpen has given these guys a little something extra. We’ve gotten some decent starts from our rotation too but having that security blanket that in a close game, there’s a 3 headed monster waiting to slam the door shut, let’s guys focus on the batter and not worry about getting fancy to extend an outing. We can’t use these guys everyday but it’s nice to know they’re there.

So where does this all leave us? We’re still 4 games under .500 but only 7 games out of the division and 4.5 out of a playoff spot. It’s also only May 16th. With basically 3 weeks on the road aside from a quick three game series against Jose Bautista and the Glass Jaw Boys back in NY next week, this is a time to make up games. It all starts this week with a West Coast road trip through Arizona and Oakland. Arizona presents the first time in a while that The Yankees get to play a team who is statistically worse than them in the standings and 3 starters that have been inconsistent at best. Heading into this series we should all be thinking sweep because right after Arizona we look for revenge in Oakland over the weekend to declared ourselves fully back.

Until then, buy a shirt.