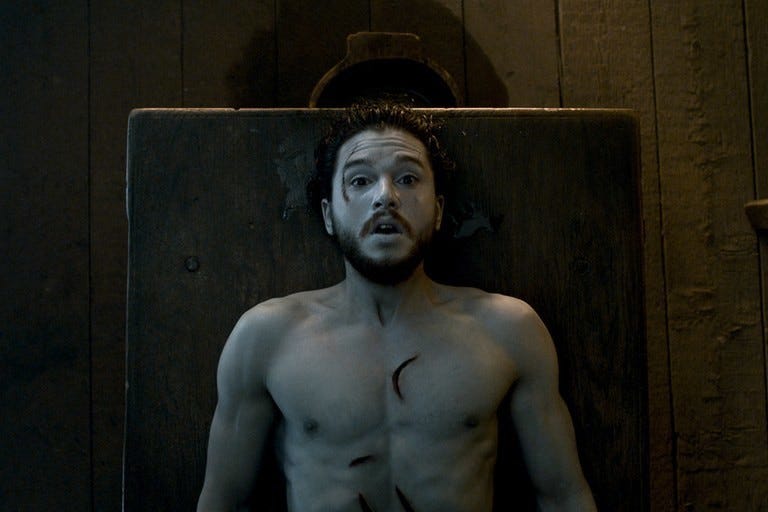 AV Club- On Game Of Thrones, Kit Harington plays the unflappable do-gooder Jon Snow, a guy who always tries to find the “right” way to do things, no matter what. In fact, he tries so hard to make everyone happy that it got him stabbed in the chest a bunch of times last season. That last bit is a spoiler, but it’s a spoiler that everyone who would willingly click on an article with “Game Of Thrones spoilers” in the headline should already know. Just to be clear, though: Jon Snow died at the end of last season. He got stabbed and collapsed into a pool of blood as the life faded from his eyes. He was dead, dead, dead.

But nobody really bought it. Almost as soon as the first knife drew blood, virtually everyone in the world shrugged their shoulders and acknowledged that he’d probably come back to life somehow—and he did, a few episodes ago. Before he was resurrected, though, everyone involved with Game Of Thrones had to keep pushing the official line that Jon Snow was dead and would never be coming back, to the point where Harington himself even felt the need to apologize once the big reveal had aired.

Apparently, though, Harington did tell somebody the truth about Jon Snow’s fate, and the way he did it may have been mildly illegal. During a recent appearance on The Tonight Show, Harington told a perfectly prepared anecdote about one time when a cop pulled him over for “being a bit naughty and going over the speed limit” in his car. It turned out that the cop was a Game Of Thrones fan, and when he realized who he had pulled over, he decided to put on a little pressure. Essentially, the cop solicited a bribe, telling Harington that he could either go down to the station and get a ticket, or he could tell the truth about what happened to Jon Snow. Harington—recognizing when a cop is extorting information from him—freely gave up the spoiler, to which the cop responded: “On your way, Lord Commander. Keep the speed down this far south of the Wall.”

Love this move from Jon Snow (Kit Harrington’s name is now officially Jon Snow in my eyes). Before Thrones took off, Jon Snow was just some 5’8″ mopy looking motherfucker that was probably a poor waiter because we have been told that every actor in the history of man was a poor waiter before their first big break. But now thanks to of all things, a sci-fi show about dragons and zombies, he is able to get whatever he wants. If you can trade in what you do for a living in order to get an HJ or a Get Out Of Jail card just because of what you do for a living, you jump on it 100 times out of 100. I don’t care if it means you are working at Mickey D’s and hook up someone with a few large fries or you drop some spoilers on a superfan’s head. You have to seize the chance to take advantage of your job at any given moment. Hell, Jon should have probably just went around threatening to spoil the show to get out of anything he didn’t want to do now that the book spoiling assholes are on (basically) the same playing field as us. Weaponizing spoilers in 2016 would be such a boss move.

Also, that “On your way, Lord Commander. Keep the speed down this far south of the Wall” line by the cop is the most cringeworthy thing I have ever read in my life. That guy definitely dresses like these three when watching Thrones in his house. 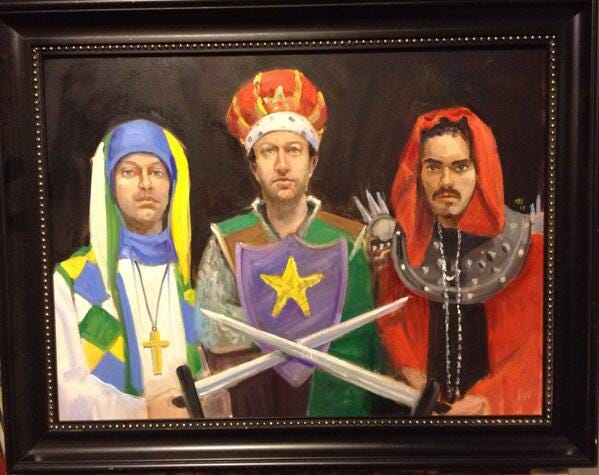