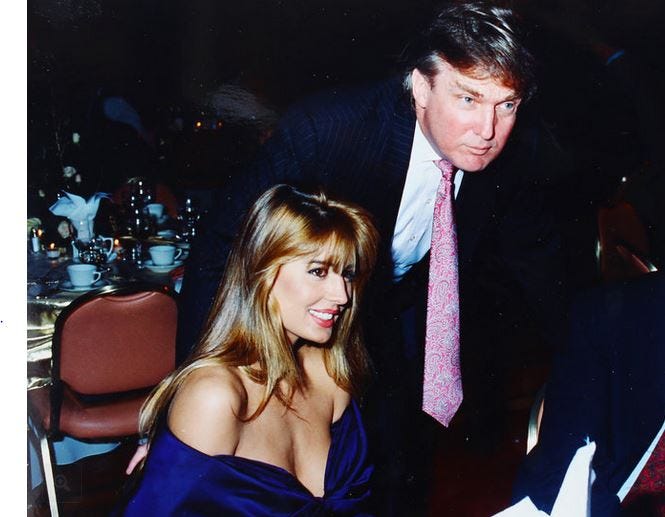 (Rowanne Brewer may be hottest chick I’ve ever seen)

NYTIMES – Donald J. Trump had barely met Rowanne Brewer Lane when he asked her to change out of her clothes. Donald was having a pool party at Mar-a-Lago. There were about 50 models and 30 men. There were girls in the pools, splashing around. For some reason Donald seemed a little smitten with me. He just started talking to me and nobody else. He suddenly took me by the hand, and he started to show me around the mansion. He asked me if I had a swimsuit with me. I said no. I hadn’t intended to swim. He took me into a room and opened drawers and asked me to put on a swimsuit. Ms. Brewer Lane, at the time a 26-year-old model, did as Mr. Trump asked. “I went into the bathroom and tried one on,” she recalled. It was a bikini. “I came out, and he said, ‘Wow.’ ” Mr. Trump, then 44 and in the midst of his first divorce, decided to show her off to the crowd at Mar-a-Lago, his estate in Palm Beach, Fla. “He brought me out to the pool and said, ‘That is a stunning Trump girl, isn’t it?’ ” Ms. Brewer Lane said. The 1990 episode at Mar-a-Lago that Ms. Brewer Lane described was different: a debasing face-to-face encounter between Mr. Trump and a young woman he hardly knew. This is the private treatment of some women by Mr. Trump, the up-close and more intimate encounters.

Did people read this hit piece by the NY Times on Donald Trump this weekend? It was intended to show that Trump basically hates chicks and treats them with disrespect. This story about him hitting on this supersmoke was their #1 example of what a chauvinistic pig he is. He hit on a girl at his own private pool party. Umm are you fucking kidding me? Listen I don’t care whether you love or hate Trump.  If this story bothers you you’re a peanuthead. The dude threw a pool party for models at his mansion. Of course he’s gonna pick out the girl he likes the most and fuck her.  This chick knew EXACTLY why she was at this pool party. She was a model, she was hot, she was looking for upward mobility and that’s exactly what she got. That’s how life works. If you want to be treated for your brains don’t show up at model pool models. It seems pretty straight forward to me. There is literally nothing “debasing” about his behavior here.  Donald was flaunting what he had (money and power) and this chick was flaunting what she had (tits and ass) and those two things go hand and hand and have since the beginning of time. That’s not a Donald Trump thing. That’s a human thing.