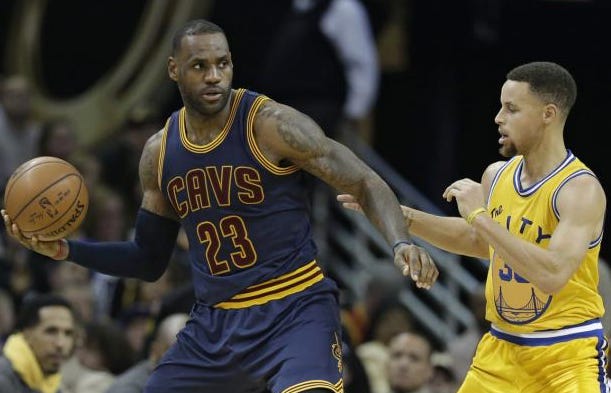 (Source) LeBron James won’t debate whether Golden State’s Stephen Curryshould be the NBA‘s MVP this season. That’s an indisputable slam dunk.However, James might argue about the award’s meaning.One day after Curry was voted the first unanimous winner in 61 years, James, who finished third behind Curry and San Antonio’s Kawhi Leonard, said the honor can be interpreted in different ways.“I think sometimes the word `valuable’ or best player of the year, you can have different results,” said James, a four-time MVP. “You know, that’s not taking anything from anyone that’s ever won the award.“’

Curry is the 11th player in league history to be voted MVP in consecutive seasons and first since James in 2012 and 2013. The Warriors’ backcourt wizard is also the first guard to do it since Phoenix’s Steve Nash in 2005 and 2006.James, who averaged 25.3 points, 7.4 rebounds and 6.8 assists during the regular season, was awed by Curry’s shooting prowess.

“Look at Steph’s numbers,” he said. “He averaged 30, he led the league in steals, he was 90-50-40 (shooting percentages from the free-throw line, field and 3-pointers), and they won 73 (games). So, I don’t, do you have any debate over that, really, when it comes to that award? But when you talk about most `valuable’ then you can have a different conversation, so, take nothing away from him, he’s definitely deserving of that award, for sure.” Coincidentally, James and Curry are both from Akron, Ohio, born in the same hospital 39 months apart.

Me right now for Lebron

Bravo sir, Bravo. I wasn’t exactly sure how Lebron was going to side swipe Steph Curry, especially with Zero Dark 23-30 going on, but he did it. It was masterful. Bravo. “When you talk about most valuable, then you can a different conversation”. Not outright accusing Steph of not being the most valuable. Not saying he wasn’t deserving. Just letting out a stale fart about the word “value” and slowly walking away from it. I love it. Even threw in the “not taking anything away from anyone” disclaimer, the sorry I’m not sorry of MVP congratulations. Even added you can’t debate Steph’s winning of that award only to throw in the extra debate about a word. Good work Lebron, some people didn’t think you could do it, then you did. Bravo indeed.

1. I said the other day that I actually agree with anyone who wants to argue purely on semantics that Lebron is more valuable than Steph. But still, just let the guy who had a historic year have his MVP, no reason to cut him at the knees with a debate on a fucking word. That’s why this is lame.

2. These playoffs could not have set up better for Lebron and the Cavs. They are going to play 13 maybe 14 games before the Finals whereas the Thunder/Spurs will at least make the Warriors work next round. Not trying to get ahead of myself but I think this will be an all time great NBA Finals. Goes 7 games with a few instant classics sprinkled in. As a fan of the NBA in general I’m outright giddy at the thought of a Game 7 Finals Steph vs Lebron.