The outfield has been doing this all season but last night we got a particularly clear shot of it and I must say, I love it. Baseball is such a long season that you have to have quirky things to break-up the mundane if you’re going to be successful. You gotta have Koji going high five city, Papi picking up Koji and giving him a spanking, or the entire outfield getting together to bow and then hit whatever that really popular dance is called. That’s what successful teams do.

But, as good as this shot is, I need more clear ones when Brock Holt is in left because you just know that man has no idea what’s going on. Guys with Twitter pages like this 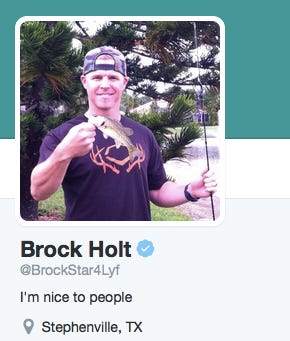 don’t typically have their finger on the pulse of hip, black dances. Mookie and JBJ must spend more time teaching Brock this dance than they spend in the cage but if photographic evidence tells us anything, they need to spend even more time.

But still, Brock looks goofy as hell there and it makes me love the dance even more. That’s winning team camaraderie right there.