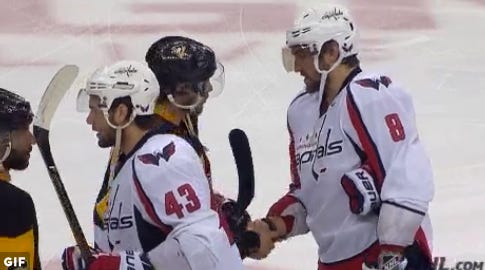 Well, another year for the Caps in the books. To say it doesn’t sting would be a lie. If you read this website, chances are you put value into sports and your teams. Probably a bit more than you should, all things considered. As I get older, I find myself putting less and less value into my teams, half because they are a constant thread of disappointment, and half because there are other things in life (friends, family, alcohol, relationships, alcohol) that take their place without disappointment. But the Caps, as much as I try to devalue in my life, I cannot shake. They are my albatross.

Sports have a weird way of giving you hope. We as the every day people invest so much of our lives and money into millionaire playing a sport. It’s kinda weird to step back and think about it, but the way they compete at such a high level and represent your city is why we watch. Because at the end of the day, you want to be able to tell people that your team is better than theirs. Which is why people obsess over the draft, over each and every signing, over who is hired and who is fired. Because all you want is that feeling of success, of winning, of being able to brag about your team winning a championship.

And it’s multiplied x1000000 here for me in internet blog world. I put my heart on my sleeve with this team. I don’t have a Caps writer to take the L for me. I fight day in and day out for this team. And I’ve done that since my first game when I was 2 years old. My dad was an original season ticket holder for the Caps and I’ve been going to games since I can remember. I’ve bought playoff tickets when I’ve had less than $1,000 to my name. When it comes to sports, there’s not a team that I care more about than the Caps.

I thought this year would be different. I don’t buy into the narrative that previous years’ failures effect this year. The Caps losing in 1998 makes no difference to this team. The Caps losing in 2006, 2009, 2010, etc makes no difference. New team, new coach, new mindset from these players. The Caps dominated the regular season. They scored at will, Holtby was tremendous, and the defense and special teams were stellar. It looked like finally this might be the year.

And then they ran into Pittsburgh. The Penguins entered the playoffs after going 14-2 in their last 16 games of the season. They were the best team in the league since the New Year– better than the Caps. While the Caps were the best team in the first half of the season, the Pens were the best team in the 2nd half. And the Caps didn’t play poorly. That’s the thing- the NHL playoffs are a game of inches. A game of bounces. There are 100 spots you can look back on and be like “oh man, what if that puck was a quarter inch to the left?” But unfortunately, that’s the beauty of it. You can’t say that. When it comes down to it, the Caps couldn’t solve Matt Murray, who seemingly made every save. He was a brick wall back there.

The regular season was a ton of fun. Best team in the league. Ovi scored 50 again. Oshie was great. Kuznetsov and his “twister” passes were incredible. John Carlson was a beast on the blue line. It was fun to watch, fun to blog, just incredibly enjoyable. I hate the narrative that the regular season “doesn’t matter” because the words “doesn’t matter” mean that you can’t have positive takeaways from it, which couldn’t be further from the truth. The cool regular season moments still existed. Sports are a getaway from real life, and for the majority of the 82 regular season games the Caps made being a fan of theirs fantastic. It absolutely sucks however that they couldn’t win the cup. That’s the only goal, and they came up short. Of course they and I would trade every regular season accolade for a Cup, of course.

So another long offseason is upon us. And the Caps will come into next season possibly as the favorites to win the Cup. The core is still here- Holtby, Ovechkin, Kuz, Backstrom, Alzner, Carlson, etc. The young guys like Bura will only get better. Ovi is still in his prime. Trotz is still a great coach. And we’ll get to ride this roller coaster all over again next year, and I’ll believe, once again, that “this is the year”. Because if you don’t believe that, what’s even the fucking point?