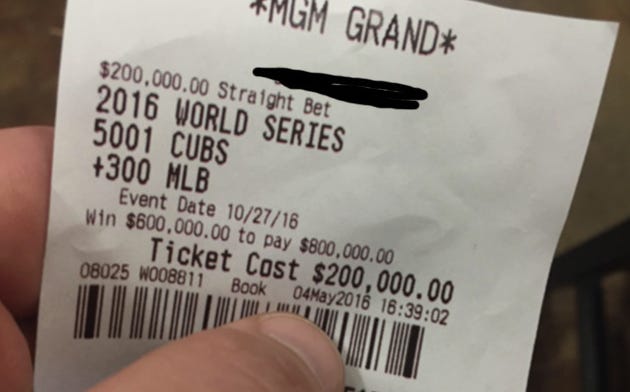 (Source) The Cubs are, by no small margin, the best team in baseball this season. They’re 24-6 overall, and are one of only 10 teams in history to win 24 of their first 30 games. Five of those nine teams went on to win the World Series.

According to Net One Sports, a Chicago man named Don Majewski feels so good about the Cubs this year that he bet just about his entire life savings on the team winning the World Series. Earlier this month he withdrew $200,000 from savings, flew to Las Vegas, and put it on the Cubs. Here’s his ticket (photo via Net One Sports):

“I waited overnight before buying the ticket because I promised my wife I’d sleep on it,” says the 54-year-old sanitation worker turned carpenter. “I’ve been watching the Cubs my whole life, and when you’ve been doing that, you know that this team is truly special,” says Majewski.

“I know it seems crazy, but what am I risking, really?” asks the 54-year-old Majewski. “I could save for six more years, and maybe I’d have, what, a quarter million to live on for the rest of my life? And that’s if the market doesn’t tank again.”

Majewski says he wishes he would have placed the bet sooner, when the Cubs had worse World Series odds. They were 6-to-1 back in April, so for every dollar he bet, he would win six.

Well I was going to say this is stupid simply because he got an awful price at 3-1 but it looks like Don Majewski realizes that so there is no point in crying over spilled milk. Instead I’ll simply say, good luck. Good Luck because I want the Cubs to win first and foremost but also good luck because this type of gambling logic is my absolute favorite.

“I know it seems crazy, but what am I risking, really?” asks the 54-year-old Majewski. “I could save for six more years, and maybe I’d have, what, a quarter million to live on for the rest of my life? And that’s if the market doesn’t tank again.”

Guy risks his entire life savings and has somehow spun it into “what am I even risking, right?”. That’s simply fantastic.  I mean stock market will probably crash again at some point so that money would have been lost anyway. Might as well take a shot of a lifetime and see if you make it big. If you can’t respect that type of gambling then we wouldn’t make very good friends. Everyone uses their own bargaining tools to talk away their gambling losses, well Don Majewski is the absolute King. God Bless you, the world needs more guys like Don.

1. Love the “I promised to sleep on it” line. Apparently that was enough for Don’s wife, just sleep on it one night before you bet our entire life savings. She’s an absolute saint.

2. The guys who get tattoos just got dunked on so hard.

3. I would love to watch Don Majewski watch one of those Charles Schwab 401k commercials. Probably smashing the SAP button wondering why they’re talking in a completely foreign language.

4. I can’t wait to party with Don this October.