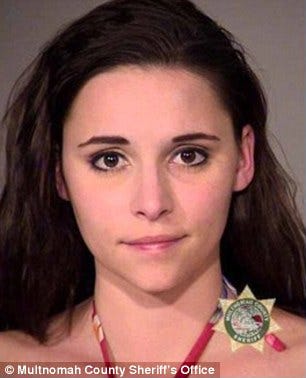 NYDN - An Oregon woman was charged with molesting a female passenger on a flight from Las Vegas to Portland. Police said Heidi McKinney, 26, touched the woman’s breasts and genitals without consent during flight 621 on Alaska Airlines on Sunday. They arrested her at Portland’s PDX airport after the plane touched down, according to an investigation report published by The Smoking Gun. The alleged unwanted contacts happened while the plane was in Oregon airspace, the document states. Police spoke with the other woman after the flight landed and later arrested McKinney.  The 26-year-old, of Banks, Oregon, was charged with misdemeanor third-degree sex abuse. She was booked into the Multnomah County jail on Sunday and her bail was set at $2,500 according to The Smoking Gun. Authorities released McKinney on Monday and a ‘no complaint’ disposition was filed in the afternoon according to KGW.

Cant even fault this chick one bit. That flight home from Vegas aint a normal flight. You spend a weekend in Vegas doing literally whatever you want. You want to do those drugs? You do em. You want to have sex with that person? You fuck them. You see a pair of tits that you wanna grab? Guess what? You grab em. Thats just how it works. Decent looking chick like Heidi can legit walk up to a chick in a club, grab her tits, rub her pussy, and the other girl will probably just run with it. Thats the sort of shit you go to Vegas for.

And then you’re just supposed to hop on a plane and act like a standup citizen?? No more than a couple hours earlier you were probably wrapping up a coke fueled threesome. Spent the whole weekend on your back and all the sudden you’re supposed to sit there with your seat in your upright position? Seatbelt securely fastened? For sure not. Poor Heidi was just having a little bit of trouble with re-entry. That happens to the best of us. Re-acclimating is no small feat. I’ve always said there needs to be like a decompression stop when you finish a weekend in Vegas. You know when people are handling a deadly disease like Ebola and they step into like a decontamination chamber before stepping back into the real world? Thats what you need after Vegas. That first plane ride out of Vegas is still like pseudo-Vegas. You can still grab girls’ tits and stuff. You get fucked up. You kinda do whatever you want. Then that plane lands in like the middle of Kansas. You have 12 hours to get your shit together before heading back into the real world. That first plane though, thats still anything goes. Your tits are fair game to get grabbed. Once you get that first flight out of Kansas, you gotta behave yourself.