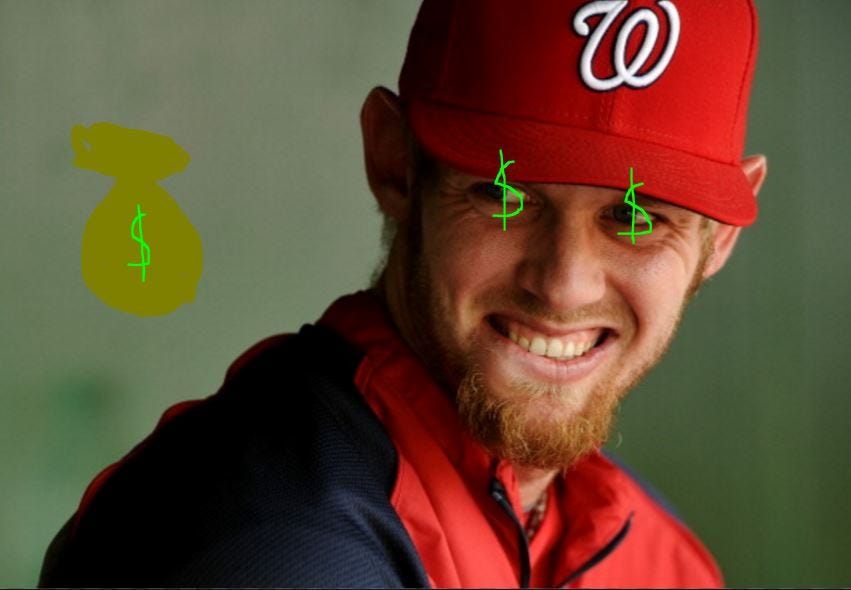 After signing Cy Young winner Max Scherzer to a deal until 2021 last offseason, the Nats just upped the ante and extended Stephen Strasburg through 2023. Not only does the extension signal that the Nationals are very serious about making the most out of Bryce Harper’s early years, it also proves to Bryce thatwe will do whatever it takes to put together the best roster possible. But enough about Bryce, Bryce might be the best player in baseball but Strasburg is still evolving into a bonafide ace.

A 7 year, $175 deal is pretty fantastic for someone of Strasburg’s skill level. 25 million a year is a lot, there isn’t any denying that but if we look at the contracts signed just this past offseason, we should feel pretty good about it. Even before Zack Greinke and David Price scuffled to start off 2016, I would’ve preferred Stephen Strasburg at 7/175 over Greinke at 6/206 or David Price at 7/217. Strasburg will be 35 at the END of his contract so it really isn’t that unrealistic that he produces throughout. 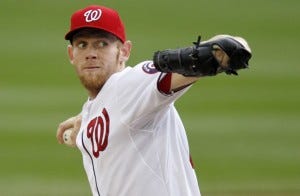 And while Strasburg’s overall stock may be suffering from the fact that people think that he never fully reached the superstar hall of famer tier that scouts and writers put him in, he really has been one of the premier pitchers in all of baseball over the past 11 months. For example, let’s compare Strasburg’s results since returning to the Nationals from an injury on June 23rd, 2015. Since then, the ace has had a 1.96 ERA, a 2.03 FIP, 2.26 xFIP, and 157 Ks in 124 frames. This pretty substantial 124 inning sample puts him ahead of all American League Aces (like Chris Sale, David Price, or Dallas Keuchel), teammate Max Scherzer, all of the Mets pitchers, and everyone except for Clayton Kershaw and Jake Arrieta. Strasburg has been a top 3 pitcher in baseball for the past 11 months and I really don’t know how much regression (if any) he is in for.

The Nationals are locking up an ace at prices much lower than what he would get on the market and I really don’t see any real downsides to this. The biggest question mark of the offseason has been answered in May, a shutdown group of Strasburg, Scherzer, Ross, Giolito, and a very capable 5th starter seems to be in the books for the next several years, and the Nationals are making all the right decisions (with the exception of keeping Trea Turner in the minors – which, is actually a little bit more understandable now that we know the Nationals will have great pitching for years to come). This is a formidible group for years to come.

Let’s get ready for another 7 years of Strasburg!