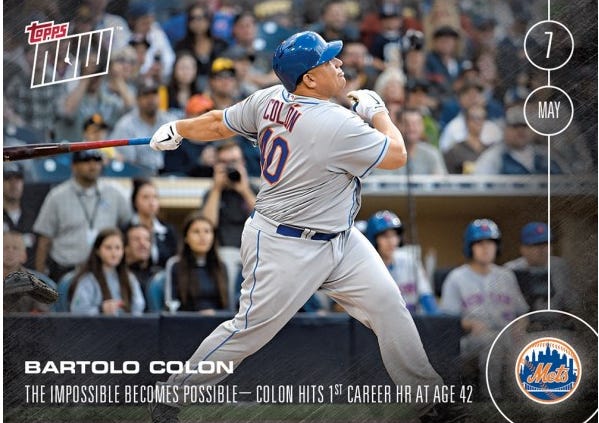 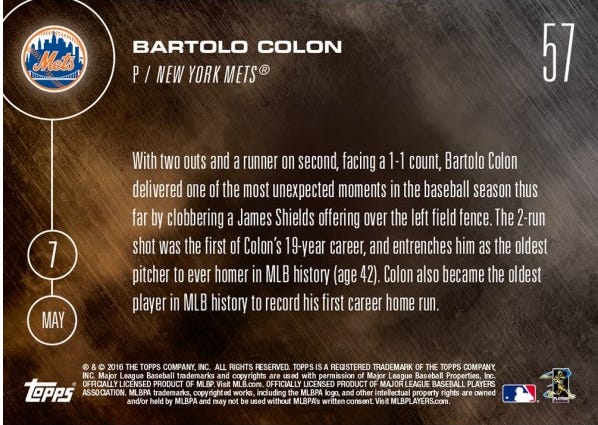 ESPN- A baseball card of Bartolo Colon’s home run shattered sales records of Topps Now, the card manufacturer’s new on-demand printing business. The company sold 8,826 cards of the 42-year-old pitcher hitting a home run on Saturday. The card went on sale at 11:30 a.m. ET on Sunday and stopped production exactly 24 hours later. The program, developed this year by Topps, takes a popular moment and sells and produces as many cards as are ordered in 24 hours. Each of the cards sells for $9.99; bulk orders are cheaper.

Prior to sales of Colon’s card, the cards that sold the most were Jake Arrieta’s no-hitter (1,808 cards), Kris Bryant’s grand slam and home run during Arrieta’s no-hitter (1,644 cards), the debut of Rangers rookie Nomar Mazara (1,427 cards) and the hot start to the season for Astros rookie Tyler White (1,350 cards). “This moment was the perfect storm,” said Jeff Heckman, director of product development and e-commerce for Topps. “It was the right player in the right market and it happened on a weekend.”

Would you look at that. Yesterday I blogged about how this card was an absolute must buy and today we find out that Big Sexy is able to move weight, whether it’s trotting around the base paths after going yard or slinging laminated cardboard. We already knew he was the most electrifying player in the game today and these numbers just back up it up. Big Sexy didn’t break the record, he annihilated. Blew it up into a million tiny pieces like after Mega Man dies. Bartolo is officially the Colossus of Cards. The Sultan of Tuff Stuff. The Great Bambino of Beckett.

My real question is how does this effect me and the other 8,825 geniuses that spent $10 for a baseball card in 2016? I mean basic supply and demand says that almost 9,000 cards being printed makes these not as rare and thus worth less. But now that there is a finite number of cards in this world that will never go up, won’t demand skyrocket once it sinks in that there are less than 9,000 of these cards that the world will ever see? If I ever wanted to sell this on eBay, could I become a millionaire? A billionaire? These are the questions we need Stool Financial around for, God dammit. Needless to say this treasure will be getting the best treatment a baseball card can get. The screw case. I am so happy I finally have a fall back plan in life if this whole Barstool thing doesn’t work out. I cannot WAIT for my gem mint 10 Big Sexy card to arrive in the mail. Don West damn may bust a nut if he is one of the 8,826 as well.

Update: This can’t hurt the card’s value I suppose.