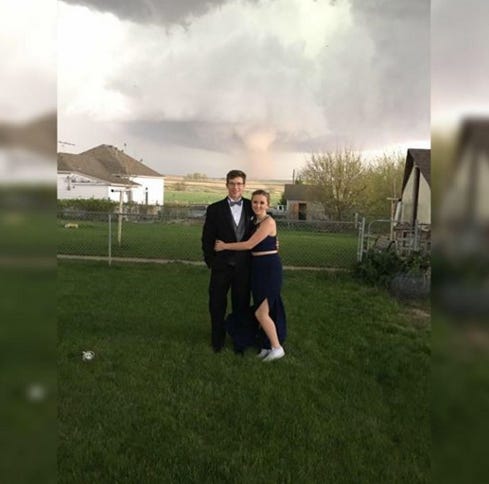 HP - A tornado gave a teenage couple from Colorado a prom night to remember. Ali Marintzer and her boyfriend Charlie Bator were getting ready for their dance at Wray High School on Saturday when a monster twister struck nearby. After realizing the tornado was too far away from their homes to be a threat, the pair posed for a photograph in front of the storm:

Hold it right there. I don’t know much about tornados, but there is one thing I do know about them- a tornado is NEVER too far away to be a threat. It’s a fucking tornado with nothing in between and these 17 year olds are making the executive decision that it’s “too far away from their homes to be a threat”? Get the fuckkkkkkk out of here. At 17 years old you barely know how to tie your own shoes, nevermind judge if a tornado in the distance is going to kill you. I’ve never read a cockier quote than Ali Marintzer deciding she’s a meteorologist and that tornado is just bluffing. Cool prom pic, I’m sure your boyfriend you’re going to cheat on freshman year of college and then break up with over Thanksgiving break looks just thrilled.

Props to the young ladies though. They know you only get 1 prom. Gotta take advantage of it, people getting hit by flying cows or not. 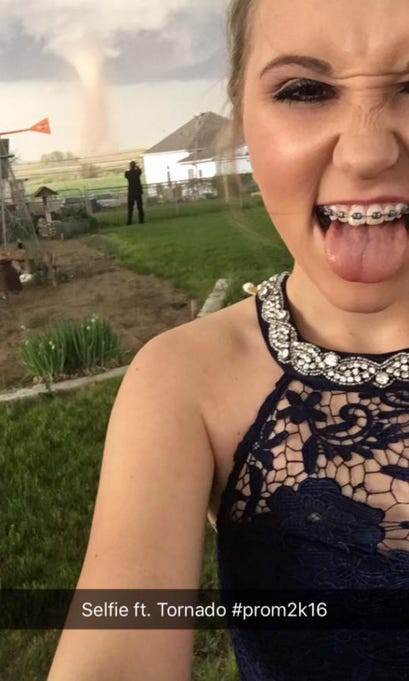