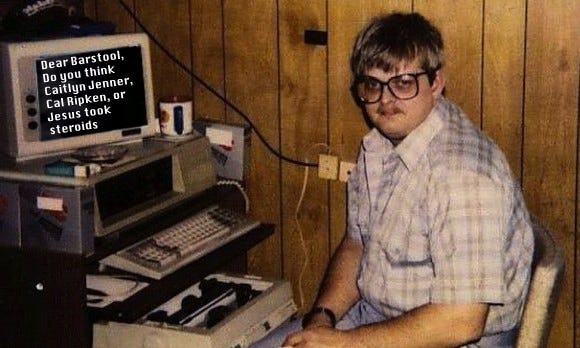 Welcome back to the weekly ombudsman column where I take your questions, comments and concerns about the site. Finally someone asked me a tough question this week about how come there’s so much T & A on Barstool. Its a common refrain you hear from alot of Barstool’s detractors but I’m glad I finally get to address it here.

As always, direct your own queries to BarstoolOmbudsman@Gmail.com and I will try to answer them in next weeks column.

There are only a few huge steroid scandals per generation that could be broken and if Jenner had juiced up back in the 70s that would be a massive one. Basically the only people that would shock anyone anymore are Ripken, Tebow, and Jordan and I’m about a gnats eyelash away from pointing the finger right at them. We like to be ahead of the times when it comes to lobbing unfounded steroid accusations at people but I’ll put our hand up and say we missed the Jenner story by about 40 years.  What a roller coaster Caityln’s lived through, huh? Dsylexia, ACL surgery, Illegal testosterone, gold medals, the OJ trial, legal estrogen, nude cover of Sports Illustrated. Say what you want about Caitlyn Jenner but I doubt there is anything unchecked on her bucket list. You talk about a life lived to the fullest.

Here’s my promise to you- we’re going to ramp up the steroid allegatons around here. No more free passes. Looking in your direction, Jesus and Achilles.

Never been able to post [comments]…and your answer is basically ‘you were blocked for no good reason and we can’t fix it’. What kind of BS answer is it that your technology isn’t current enough to unblock those who didn’t deserve blocking when they tell you they are blocked?

Lame. Many thoughts, zingers, one liners lost (I have to assume he and I are not alone) thereby diluting, minimizing participation and interaction….and interest with Barstool.

Yes my answer is basically “we can’t fix it.” I don’t think you appreciate how antquated our technology is here, but that’s part of the barstool charm. We basically have to will each blog to get published out of pure grit and sticktoitiveness. But I did research the issue a little bit more and I’m told 99% of aspiring Commenters have no problem setting up and accessing a account until they say offensive enough to get banned, but for the 1% who never get to there’s nothing we can do yet. Literally the only way we would have to fix this issue would be for Dave to send Hank into the server room with a miners hat and a screwdriver and hope for the best. When the site starts to get updated by Chernin everything should be fixed but in the meantime Ken, I have a comprimise. You can just email your comments to BarstoolOmbudsman@gmail.com and I will publish them here if they are any good and we’ll let the readers decide on your talent. Hows that for interaction.