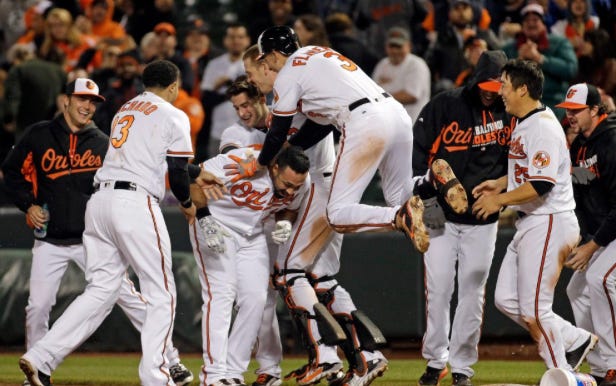 Another up and down week for the O’s, yet they still find themselves battling for first at 16-11.They spilt with the White Sox, which easily could have been 3 out of 4, and took 2 of 3 from the Yankees, while only scoring 5 runs. I’ll take that, even though the Yankees suck. They stink, they are terrible. I can’t believe C.C. got sober enough to have his first start since 2013 with 0 ER. Much like the Tampa series last week, this Yankees series the bats went silent again, with another 20+inning streak without scoring. Almost impossible to think that could happen to a lineup with this many big bats. But when guys like Schoop, Davis, Alvarez, Jones, and Wieters are all hitting under .240, that can happen. 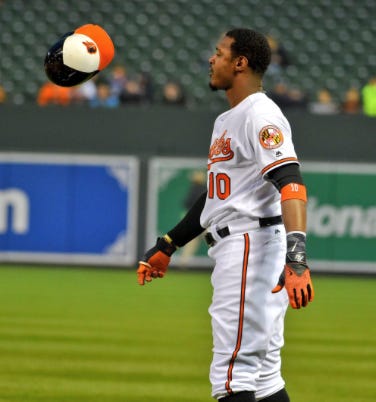 Adam Jones is slumping, bad. Bothered by a rib injury suffered early in the season, Jones hasn’t looked right all season. At the plate, in the field, just doesn’t look like the normal Adam. You’ve seen him grimace after big swings, trying to stretch that area out, and just the other night, on a ball not that deep with Ellsbury on third, he didn’t throw home for a play. Some said the ball was bobbled in the glove, I didn’t see it. I think that injury is still lingering on, and is causing him major discomfort.

He’s just not the same Adam Jones we are used to seeing. April and May are normally some of his hottest months, but not this season. He’s batting .207, with only 1 home run, and only 7 driven in. Being in May and having the same about of GIDP as he does RBIs is not good. Since coming to the O’s in the dark days of the franchise, he has helped turn the club into a winning team, so watching him struggle stinks. But what he is lacking at the plate, he makes up for it in the field. He continues to play his Gold Glove winning defense. The throw below shows that he is healthy enough to really uncork one and nail Jimmy Rollins at home, even with a tough catch, and having to set his feet on the wet grass.

Jones missed some extended time with a bunch of different injuries last year, the first time he has really missed any time since breaking an ankle in his first few seasons here. Even with his injuries last season, he rebounded to put up his normal numbers, 27/82/.269. Still plenty of time left for Jones to rebound and put up those numbers, and if the O’s are playing this well without Jones performing, who knows what they can do if he does find his stroke again. 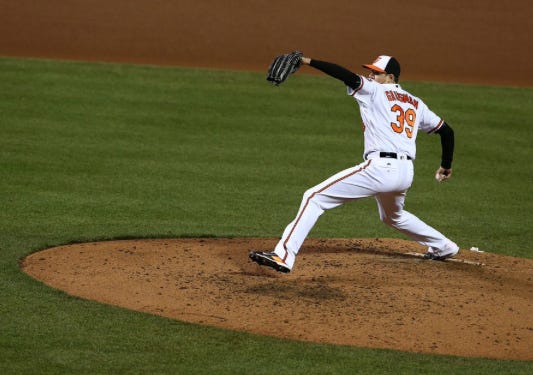 Kevin Gausman Is A Stud

This is what we expected from the former first round pick, we knew he had it in him. He just had to mature, and get some confidence that his stuff works in the bigs. Guess what, he figured it out. Ever since coming off the DL, he has been the O’s best pitcher. He has an 0-1 record, but that is because the win-loss record for pitchers is stupid. Last night, Gausman went toe-to-toe with Tanaka and proved that he has the stuff to be the eventual ace of this staff. 8 IP,3 H, 0 BB, 0 ER, 4 K for Gausman as the O’s pulled out the 1-0 win in 10 innings. His great start last night was the longest by an O’s starter this season and lowered his ERA to 1.42, giving him 14 Ks and only 3 BB this season to go along with a .68 WHIP.

The big change is his confidence. Last year he was taking the shuttle to Norfolk or Bowie, and coming out of the bullpen, this year they made it know, if he’s healthy, he’s going to be starting. He goes out to the mound knowing his stuff is good, and that he won’t be optioned after the game, he is here to stay. His splitter looks good, his fastball is around 96-97 with movement, and he’s even clocked 100 a few times. He’s also using his curveball a lot more this season than he has before, which is just another weapon for him if he can locate it. If Gausman can be the stopper for this team, a guy who when he heads to the mound, will hold the opposing team to less than 3 runs, that can be huge, especially with the way Tillman is pitching now, sky is the limit for this kid.

- JJ Hardy is out for 6-8 weeks with a hairline fracture in his left foot. Happened Sunday when he fouled one off his foot. While the injury sucks, it mostly hurts the O’s on defense. It forced Buck to bring Ryan Flaherty back up, place him at third, and swing Manny over to short, his natural position. He was the best third baseman in the league, now he’s the best shortstop in the league. It is likely that Paul Janish, who was away from Norfolk for the birth of his child, will come up to play short, Flats will go back down, and Manny slides back to third. But don’t be surprised to see Manny at short sometimes, and either Davis, or Pedro Alvarez at third.

One positive about Manny being at short is we get to see him and Schoop work their magic on the double plays, gets me fully torqued. I actually prefer Flaherty up here, and Janish down in Norfolk. Janish is a AAAA player who has never hit on the major league level, but has a great glove. Flats can at least hit a little, and provides more depth off the bench. Nonetheless, gotta hope JJ heals soon. 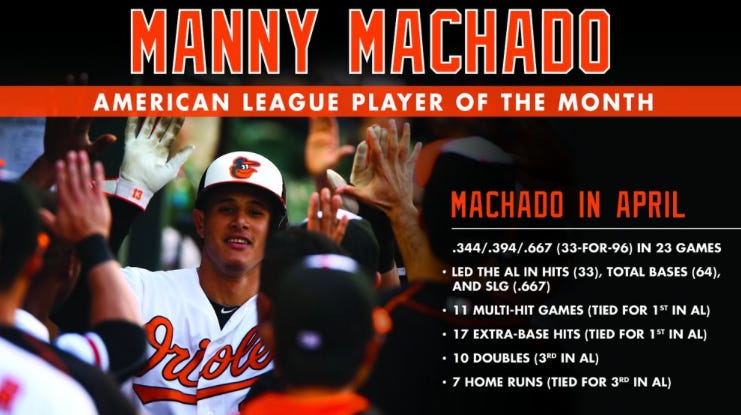 - Manny Machado won player of the month for April, and rightfully so. He absolutely raked. Look at the numbers, and you see he’s the hottest hitter in the American League. I said it last week, and the week before, he looks like a man determined to bring the MVP trophy back to Baltimore.

- Zach Britton gave everyone a scare last week when he sprained his ankle covering first in the loss to the White Sox, but only ended up missing three games before returning last night. He wasn’t sharp to start out with, but ended up with a solid outing and got the W with 1.1 IP with 1 BB and 3 Ks. At first this injury looked bad, you didn’t know if it was a hammy or an achilles injury. Luckily it was a minor sprain, and he’s already back. Crisis averted.

– How awesome is it to see Hyun Soo Kim perform well? He got booed on Opening Day for not going down to Norfolk, and is sort of shoving it in everyone’s faces. Don’t blame Kim for knowing how his contract works, blame DD for putting that stupid clause into the contract. Kim isn’t playing much at all, but is making the most of his time. He’s 10-18 (.556) on the season, scored 2 runs, 1 driven in, 3 BB, and only 2 Ks with an OBP of .619. He started the 10th inning rally last night with a Baltimore Chop, hustled down the line, and then went first to third on a hit to left center. It’s great to watch Kim hit this well, when everyone counted him out. I’m 100% on team Kim, and with Joey Rickard coming back down to earth, why not try Kim out there in left or right? He can’t be much worse than Joey defensively.

Sox are cruising right now, and with the Yanks up next for them, it would be nice to take at least 4 of these games. Oakland is right under .500, and the Twins are 12 games under, O’s need to POUND these basement dwelling teams and keep pace with Boston.