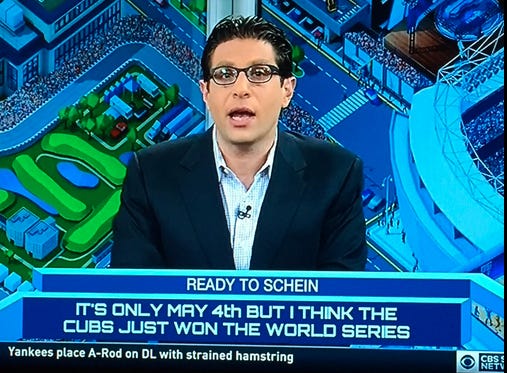 Of course this is going to start happening, the Cubs thus far have been out of this world good. I actually can’t fully believe it. We said all offseason this team was loaded, we knew that they somehow improved the roster off a 97 win season, but I never expected it to look this easy. I mean some of these stats are just downright silly.

Like I said, absolutely insane numbers. Number 1 in pitching, number 1 in hitting, the next closest team in run differential are the Nats, who are FOURTY THREE runs behind. Just absurd. And all of this is happening after they lost a key bat in Schwarber. So yes, this shit is insane and it all feels weird. I sit down at night to watch the Cubs game and I get shocked when they give up runs or don’t hang a crooked number. We’re living in some very strange days when you are legitimately stunned at a Cubs loss or even a close game with a tense situation, but that’s where we are through the first month of the season. The series this weekend against the Nats should be a fantastic one and a great test against what has been the second best team in MLB, but barring a 4 game sweep at home with like 5 injuries, nothing will change my perception on how good this Cubs team. I really don’t know how to explain it. I’m waiting for there to be a glaring weakness but it just hasn’t come through yet. The only thing I got is that we’re still the Cubs, but screw that curse bullshit, this team is so fucking good.

And with all that being said, fuck anyone who tries to say we’ve won the World Series already, even if they’re joking.