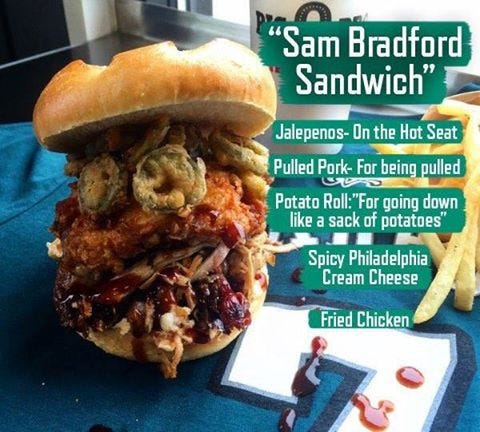 PV – Chef Drew Abbruzzese of Big Q BBQ restaurant in Levittown has created a sandwich that’s just dripping with symbolism and one that expresses his annoyance over the Eagles’ well-paid QB saying he wants out. The Sam Bradford sandwich will also be on the menu beyond Wednesday, on special for $5 until Bradford is traded away. After that, the price will hike up to $7. Notably, that seven is Bradford’s jersey number.

The ingredients say it all:

• On the bottom is a piece of fried chicken, whose symbolism, he said, was obvious.
• That’s topped by pulled pork, which represents Bradford getting pulled from a long-term starting job with the drafting of Carson Wentz. (See how this is going here?)
• For a subtle garnish, some deep-fried jalapenos. That would be Bradford being on the hot seat.
• The spicy cream cheese, a Philly staple, is show of support for the city, and the potato roll on which it sits represents Bradfors “going down like a sack of potatoes.”

Hey, I’m not above anything when it comes to a good meal. I’d (maybe) eat a KKK burger served by a Nazi puppy killer if it hits the damn spot better than 500 Degrees in its prime. And I’m in the same situation here with this Sam Bradford BBQ Sandwich. I still like Bradford, but look at that goddamn monstrosity of deliciousness.