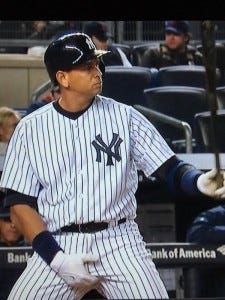 He suffered the injury while running to first base on a fifth-inning double play groundout Tuesday night against the Orioles. Rodriguez is hitting .194 with 5 home runs and 12 RBI.

Just as Alex was heating up, he came up limp running to first base yesterday and is not headed to the 15 DL. Most people thought that the move was going to be Swisher coming up since he wasn’t in the Scranton lineup today but the team decided to go with Pazos instead.

This could be the beginning of the “Scranton shuttle that was talked about all spring or this could be the first step in sending Serevino back to AAA to develop a third pitch. After blowing through the minors and being close to lights out at the end of last year, we expected big things out of Luis this year, but that has yet to happen. Between the 6.31 era and the lack of focus covering First Base last night, it may be just what he needs to get a few games in at AA to regain confidence. With Pazos up, Girardi can look to avoid using Nova for few days and if that’s the case, hand Ivan a start next week.

All of this is coming at the worst possible time because this team is pretty lost and in ned of a veteran leader. Yesterday Alex held a team meeting to let let everyone know that they should be scoring 5 runs a game, so he was trying to take that role. It obviously didn’t work last night and he was only batting .194 but with a bunch of home runs and clutch hits in the last few days, things were turning around.

From here I don’t know where we go. We have CC and Tanaka the next two nights against an Orioles team that isn’t as good as their record so we need to get these two games and win not only a game, but a series, or Boston coming to town Friday will be a nightmare.