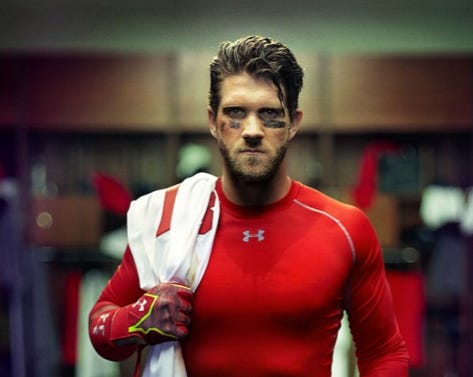 ESPN - Washington Nationals star Bryce Harper has signed a 10-year extension with Under Armour that is believed to be the largest endorsement deal in history for a baseball player, a source with knowledge of the deal told ESPN. Under Armour announced earlier Tuesday that Harper signed a multiyear extension but said terms, including the length of the deal and compensation, would not be disclosed.

Under Armour signed Harper in April 2011, 10 months after the Nationals made him the first overall pick in the Major League Baseball draft. At the time the brand signed him, he was playing on the team’s Single-A affiliate. He made it to the big leagues a year later. At age 19, Harper became the youngest player to be selected to the All-Star game and went on to win National League Rookie of the Year. In 2015, at the age of 23, became the youngest player to unanimously win an MVP award.

By retaining Harper, Under Armour continues its hold on recent MVP endorsers. It has Golden State Warriors guard and reigning NBA MVP Stephen Curry signed through 2024 and PGA Tour Player of the Year Jordan Spieth under contract through 2025. Harper’s new deal runs through 2026.

This is pretty big news. Why? Because it can change the baseball landscape for endorsements forever. Kevin Durant gets 30 million dollars per year for his shoe deal. Guess how much baseball players get? According to this article from Forbes, before he retired Derek Jeter was making 9 million dollars a year off the field…total. And was double the next guy. Derek Jeter was the face of baseball for quite a while, but what did he really do for the game? He was just a good looking dude who banged a ton of hot chicks. Did he necessarily get more kids to play the game? Did he elevate the game of baseball to another level? I’d argue not more than any other popular player would. And that’s what makes Bryce Harper so different. That’s what separates him from the pack. He has this way about him where he draws attention from all angles. Where when he’s playing, you need to watch. He has this aura about him, and his #makebaseballfunagain campaign, that makes people want to get out to the stadium to see him, makes kids want to wear his jersey, and so on and so forth.

Feits did a really good blog a few weeks ago about how nobody outside of hardcore baseball fans could tell you one thing Mike Trout has done this season. Baseball does such a shitty job marketing their young guys, but Bryce is learning how to promote himself and the game of baseball on his own. The commissioner of baseball already publicly thanked Bryce for putting Major League Baseball on his back. The MLB front office thanks the good lord every day that Bryce cares about and loves baseball and has no problem promoting it and trying to get people interested in watching it again.

So this deal for Under Armour, you have to imagine is huge. He has that main stream crossover potential that we haven’t seen in quite a while from a young baseball player. It’s going to be fun to watch him develop not just on the field, but see how big his brand grows off of it. Wouldn’t be shocked if they spun him off his own brand, a la Jordan with Nike. The sky is the limit with him.

PS: How about UA having Bryce, Steph, Spieth, and Cam? UA, so hot right now.